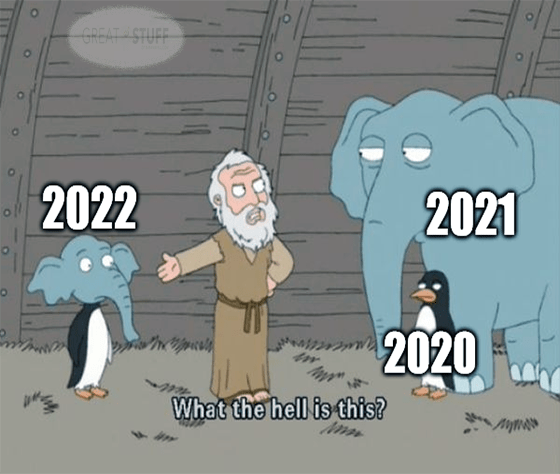 Woke up quick at about noon, just thought that I had to be on Wall Street soon…

As I tell my kids, Great Ones: “You get what you get, and you don’t throw a fit.” Oddly enough, I think that sentiment will sum up 2022’s market pretty well.

I kid, but the concerns are real — and where we end up at the end of 2022 is anyone’s guess at this point.

But that won’t stop me from predicting the future! No sir!

In fact, each day this week, I’m going to give you one of my top four investment picks for 2022! And we’re starting right now with Advanced Micro Devices (Nasdaq: AMD).

Great Ones, Goldman Sachs listed AMD as one of its “top picks” for 2022. That’s cute.

All you old-school readers may remember that back on June 18, 2019, I recommended AMD as a big-time play in the semiconductor sector. Since then, AMD is up a whopping 413%!

Congratulations to all of you who got in the first time I recommended AMD!

If you didn’t get in back in 2019, you have another chance right now. Analysts are predicting a big year for semiconductor stocks, with sales expected to rise another 9% this year and top $600 billion for the first time ever.

That’s 9% growth on top of the 26% growth semiconductor sales saw in 2021 … and that’s with the chip supply chain crunch.

Now, you’re going to start hearing about “demand normalization” and “unusually adverse climatic events” when it comes to the semiconductor sector. I say these concerns are bollocks. We live in a digital society that constantly demands more chips … much like your Uncle Karl slamming Coors Lights while watching Sunday football.

What’s more, we’re looking at massively pent-up semiconductor demand due to supply chain issues and the pandemic. Demand normalization won’t happen until supply chains are clear and the chips are flowing freer than the spice!

I can’t rule out “unusually adverse climatic events,” but then … no one can. It is what it is, and you can’t spend your investing life working about such things constantly. 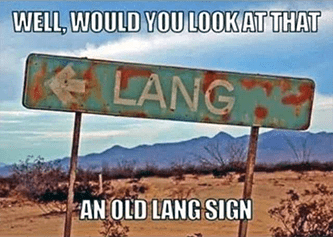 What I can tell you is that AMD will continue to expand its semiconductor empire. And it will continue taking ground from rival Intel (Nasdaq: INTC).

AMD is the current gold standard in processing power, whether that’s for AI, data centers, desktops, laptops … you name it, AMD makes it.

And it does so better and cheaper than Intel.

“Intel inside” is out. AMD everywhere is the new hotness. Even Tesla (Nasdaq: TSLA) has ditched Intel for AMD, putting Ryzen chips in Model Ys, Model Ss and Model Xs.

If it weren’t for the semiconductor supply crunch, AMD just might already be everywhere. As this laughable chip logjam clears, expect AMD to ramp up and take full advantage of pent-up demand.

In fact, there’s really only one competitor that AMD needs to fear … and we’ll talk about it tomorrow. (Email me at GreatStuffToday@BanyanHill.com if you think you know.)

The bottom line is that AMD’s bottom line continues to grow by an average of 54% year over year.

Last year, analysts projected AMD stock to rise by just 20% … but it actually gained more than 50% in 2021. And Wall Street’s setting the same limp target of 20% growth again this year. Blah blah blah…

I’m not buying it. I wouldn’t be surprised if AMD closed above $200 this year. And so, with Wall Street once again underestimating this semiconductor juggernaut, I’m reiterating AMD as a buy for 2022.

This rally ain’t over. Buy AMD.

Already in AMD? Check this out instead:

An upgrade so big and so powerful, Paul calls it “America 2.0.” And he believes those at the forefront of this upgrade could reap massive rewards. Paul wants you to be one of them.

Click here to see what Paul is calling “America 2.0.” 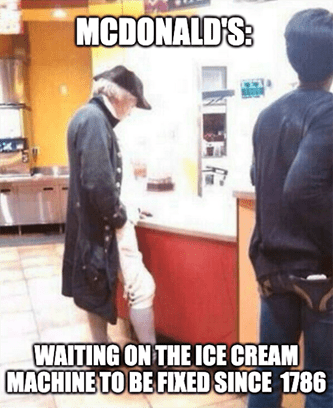 Piper Sandler is banking on New Year’s resolutioners falling off their dieting diatribes quicker than I snoozed my Monday morning alarm after the holiday break.

Personally, I wonder what god those offerings are going to … but then again, it’s best not to ask too many questions when it comes to McDonald’s and its mysterious finger foods. (Chicken McNuggets are probably not made from real chicken, and that’s a hill I’m willing to die on … while munching on some spicy nugs, of course.)

Still, analysts remain cautious on Mickey D’s might. After climbing a little more than a percent in the wee early-morning trading hours, MCD stock melted like a McFlurry in August and lost nearly all its gains.

Stop it, you! I refuse to give in to the fast-food frenzy this early into the new year, although that new Chipotle (NYSE: CMG) “chorizo that’s not chorizo” bowl does sound pretty good … if you close your eyes. 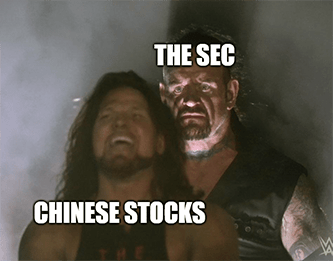 And then there was Nio. After we said goodbye to Nio stock on December 15, the Chinese automaker proved yet again it wasn’t The One that we wanted: Deliveries missed the mark in December by several hundred units and came in lower than Nio’s November shipments.

Still, it’s not all bad for the Nio nation. While the company didn’t set any records last month, it still managed to deliver more than 167,000 vehicles to date — which is more than either XPeng or Li Auto churned out.

Furthermore, Nio might have a workaround to China’s new EV subsidies tapering, which is being cut by 30% and will fall to zero by the end of 2022.

Not only did Nio tell its customers it’d absorb the difference between the old and new subsidies if buyers put down a deposit before the stroke of midnight on December 31, 2021, but its swappable batteries make certain Nio EVs exempt from subsidy cutoffs.

Despite this, U.S. investors should tread carefully with Chinese stocks going forward … especially when it comes to EVs.

As I mentioned a few weeks ago, the SEC is cracking down on foreign companies listed on U.S. stock exchanges, specifically when it comes to information sharing. If there’s one thing the Chinese government hates more than anything, it’s sharing information. As a result, there’s a good chance that many Chinese stocks will soon delist from U.S. exchanges … including Nio, XPeng and Li Auto.

The bottom line here is that while December delivery numbers were strong — and year-end deliveries even stronger — it might be a long time before Chinese EV stocks and their investors receive positive news like this again.

So, best to celebrate with the celebrating’s good … or something like that. 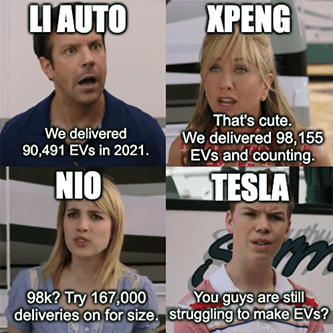 You didn’t actually think we were done talking about EV makers today, did you? Oh, nay nay! Not to be outdone by China’s delivery demonstration, Tesla (Nasdaq: TSLA) reported fourth-quarter deliveries that decimated its previous record.

Looking ahead, Elon Musk said he wants to increase Tesla’s vehicle sales to $20 million annually over the next nine years, which is no small feat for a company that just became profitable last year.

I’m not saying this figure isn’t feasible … this is Tesla we’re talking about, after all … but TSLA investors will get a better feel for how realistic this goal is once the company announces fourth-quarter earnings in the coming weeks.

Either way, TSLA stock is already off to the races in the new year, climbing more than 10% on today’s positive deliveries announcement. In fact, it’s almost like Tesla didn’t even recall half a million cars last week due to safety issues … but I guess that’s just the magic the Musk man has over today’s market.

Many are missing out on what could prove to be the BIGGEST crypto story ever.

Ian “the crypto” King is tracking a $9 trillion crypto mega boom taking shape right now — and it’s got nothing to do with bitcoin. It’s a game-changing shift in the crypto landscape. And to help you make the most of it, Ian has invited you to see his special event: Crypto’s Third Wave.

But get ready to see just how much of Intel’s lunch AMD is really eating in today’s Chart of the Week. Here’s a snapshot of AMD’s increasing dominance over the past decade: 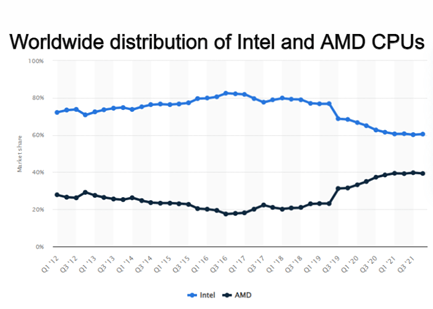 Well, well, well. Isn’t this just exactly what I said like, five minutes ago? (I know y’all didn’t just skim on over our AMD adventure up above…)

For the past few years, Intel’s production guffaws have been an open goal for AMD, and it shows in the former’s fall from computing grace. AMD’s CPU market share has jumped from the low 20% range up toward the 40% mark, just in the past few years.

If you line up when Great Stuff Picks first recommended y’all buy the stock in June of 2019, you can see that the timing couldn’t be better, as AMD started to pick up all the slack that Intel dropped.

Intel’s higher market share is currently buoyed by its lead in the server shebang — but like I said, even that lead is shrinking faster than George Costanza after a cold swim.

I didn’t need that visual. Thanks, Mr. Great Stuff…

Remember how I told you that AMD’s EPYC line of data-center-specific chips was quickly catching up to Intel’s supposed “prowess?” Yeah, about that…

While Intel’s content with merely arguing over the nuances of nanometers to make its earnings look halfway decent, AMD is out here growing earnings, raising revenue guidance left and right and boosting its production capabilities — the chip shortage notwithstanding.

Instead of fixing its perennial production problems, Intel is cutting off Mobileye to spite its face (or something along those lines). So, when you have AMD firing on all cylinders, plus Intel losing its grasp on chip customers, you get a rosy market share picture like the one above.

Are you all in on AMD? Or do you think Team Blue has a few surprises up its sleeve for Lisa Su and co.? Let me know what you think about the great AMD versus Intel debate over at GreatStuffToday@BanyanHill.com.