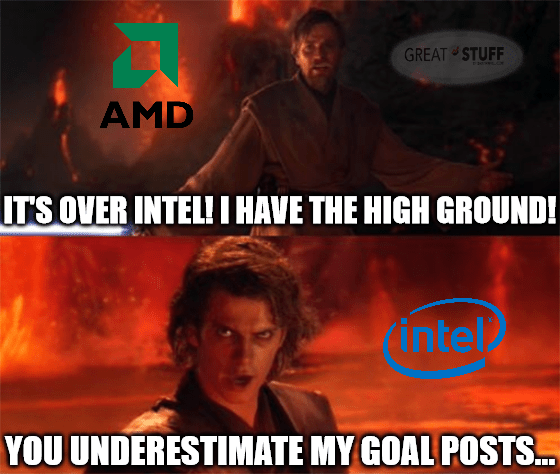 My Tech Summer (Shove It … Intel)

Hey you, Intel (Nasdaq: INTC). Tell me when it’s over…

Hey you, Advanced Micro Devices (Nasdaq: AMD). Guide me to shelter ‘cause I’m through when the nanometers hit the fan … and it’s summer.

Deftones, anyone? Anyone? Bueller?

I’ll tell you one thing: Intel needs to be quiet and drive, because AMD didn’t need to move the goalposts. The company absolutely crushed it with its second-quarter report. Crushed. It.

Revenue nearly doubled to $3.85 billion from last year and also topped the consensus estimate for $3.62 billion.

Meanwhile, AMD took Intel back to school as GPU and CPU sales rose 65% to $2.25 billion. Intel, if you remember, only saw a 6% rise in PC chip sales. What’s more, AMD’s enterprise, embedded and custom semiconductor unit reported a 183% rise in revenue. Most of those sales came from AMD’s EPYC line, which have become quite popular in the data center market.

The change in semiconductor leadership isn’t coming — it’s already here. This is AMD’s knife party. Intel has seen the butcher and is just a passenger at this point.

Enough foolin’ around. Let’s look at AMD’s guidance, shall we?

This is where it gets good. AMD now expects current-quarter revenue to rise 46% to $4.1 billion, beating out Wall Street’s expectations for $3.82 billion. And … the company said it sees full-year revenue growth of 60%!

Our business performed exceptionally well in the second quarter as revenue and operating margin doubled and profitability more than tripled year-over-year. We are growing significantly faster than the market with strong demand across all of our businesses.

In Su we trust, Great Ones. If you bought AMD when I recommended it for the Great Stuff Picks portfolio back in June 2019, you’re sitting on a 200% gain right now. Congratulations!

And we’re gonna keep on holding AMD. After all, while Intel is busy in swerve city pulling a Bill Clinton and asking what the definition of “nanometers” is, AMD is riding those cherry waves higher.

But, if you didn’t get in on AMD back when I recommended it, first, shame on you.

Second, you’re gonna have to wait for a pullback or consolidation period in AMD stock. The shares are just too hot to buy right now.

Oh, and if you jumped on that AMD August $92.50/$95 call debit spread I highlighted on July 10 … you’re likely at your maximum profit right now with AMD trading north of $95. Time to take the profits on that spread and run!

That’s a potential 171% gain under perfect conditions … but, naturally, your results will vary. Also, do note that the straight AMD August $95 call option still has a ways to go before hitting a 100% gain. Now do you see the power of debit spreads?

If you didn’t get in on that debit spread — tsk tsk tsk, the shame! There’s gotta be a simpler way, right? How about this:

Mike Carr has unveiled an ingenious new trading strategy. Investors make the same trade on the same ticker symbol in and out once a week, and they can target gains of 10% … 50% … even 100% or more every time.

Great Ones, you know I’m not an Apple (Nasdaq: AAPL) fanboy — far from it. I don’t like Macs. I don’t like iPhones. Heck, I don’t like or use any Apple product. But even I can’t argue with Apple’s fiscal third-quarter results…

The list goes on and on. Apple even saw sales in Greater China jump 58%.

We’re continuing to press forward in our work to infuse everything we make with the values that define us — by inspiring a new generation of developers to learn to code, moving closer to our 2030 environment goal, and engaging in the urgent work of building a more equitable future.

I don’t know about all that. Sounds very Corporate BS Generator to me. But Cook is speaking the language of Apple’s key demographic. And that’s critical.

But if Apple’s report was so great, why is AAPL stock down more than 1% on the news?

One word: guidance. Apple didn’t provide any, due to rising uncertainty about COVID-19 and semiconductor supply chains. Apple also indicated that third-quarter results benefitted from easy comparisons to last year’s pandemic lockdown quarter — the “Base Line” effect, if you will.

Wall Street didn’t want to hear any of that … like, at all. Hence, Apple fell despite its roaring comeback quarter.

I’m not gonna recommend buying AAPL because I simply don’t like the company. But, if you are so inclined, this post-earnings dip could be the opportunity you’re looking for.

Editor’s Note: Big Tech Is Investing In THIS Tech

Amazon, Apple, Google and even the U.S. Army are all investing in a new tech. That’s a lot of billionaires and tech companies making the same play. But few people know of this tech. And while everyone else is betting on artificial intelligence, genomics, crypto, 5G and electric vehicles…

They’re missing out on this growth industry. Click here to learn more. 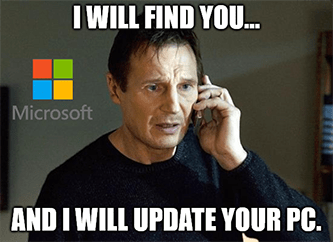 Microsoft (Nasdaq: MSFT) fully justified its existence with its latest earnings. Green shoots across the board — guidance lifted, optimism out the wazoo.

Top- and bottom-line figures both trounced analysts’ estimates. Per-share earnings reached $2.17 against the $1.92 per share that Wall Street wanted. Microsoft’s overall revenue of $46.15 billion cleared expectations of $44.24 billion with room to spare.

Even LinkedIn revenue grew 51% on the quarter … somehow. (Seriously, what are y’all up to on there? Just constantly updating resumés and congratulating people?)

Elsewhere beneath the Microsoft umbrella, ad revenue and Xbox content/service sales are flip-flopping. Gaming sales had soared 65% during lockdowns this time last year but were down 4% this past quarter. At the same time, advertising crashed amid the pandemic but is now rallying back, with search ad revenue up 53%. Even Microsoft wins some and loses some.

But never fear: Cloud domination is near! Azure cloud revenue is up 51%, which topped analysts’ expectations for 45.3% there. And we’ll find out how that stacks up to Amazon Web Service’s sales growth when Amazon.com (Nasdaq: AMZN) reports earnings tomorrow.

The one headwind that Microsoft noted (other than slight setbacks for Xbox fans) was declining Windows revenue, due to device makers simply not having devices to install Windows on. Figures. Blame the supply crunch for everything…

I’m mostly joking (mostly). Wall Street chose to overlook those supply chain issues and sent the stock up 2%, before the rest of the market’s negative Nancies erased said gains. 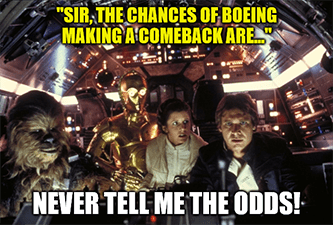 Can we pretend that airplanes in the night sky are like shootin’ stars? Boeing (NYSE: BA) investors could really use a wish right now… (Wish right now…)

Wait … what? Boeing granted all our wishes? Surprise profit you say? Well, that’s a plane of a different color!

Expectations were pretty low ahead of Boeing’s second-quarter report today. How low? Oh, Wall Street targeted a loss of $0.83 per share on revenue of $16.6 billion.

That’s pretty low for a major aerospace manufacturer and defense contractor. And Boeing was having none of it.

The company reported a surprise profit of $0.40 per share on revenue that surged to $17 billion. Operating cash flow improved. Commercial revenue jumped 268%. Defense revenue was up 4%, and global services revenue rose 17%.

Boeing also said it’s increasing production of the 737 airliner to 31 per month by 2022 due to rising demand for the plane. Even the 737 Max is seeing increased demand, with Boeing ramping that model’s production up to 42 jets per month.

In fact, the only dark cloud hanging over Boeing right now is the 787 Dreamliner, which is suffering delivery and production concerns due to the COVID-19 reemergence.

BA shares rallied more than 5.5%, leaving Great Stuff Picks readers with a gain of about 8.3% … if you got in when I recommended Boeing back in December. And while an 8.3% gain may seem small compared to other investments, our stance on Boeing is that it is a long-term buy and hold.

I fully expect BA to revisit its pre-pandemic highs above $400, which means the stock could nearly double from its current perch once COVID-19 is behind us.

Hang in there, Great Ones. BA’s rally is far from over.

Congrats! You made it to the middle of the week. You go, you.

Your reward? A brand-spanking-new poll to answer. But first … last week’s poll results!

Our previous poll asked if you had bought the crypto dip (you know … the last one). And if so, which coin did you buy?

Great Ones’ crypto of choice? Ethereum, with 45.7% of the votes!

For better or worse, second place goes to those of you who said “I’m not playing this stupid game” and didn’t buy anything. 32.6% of you don’t want anything to do with that funny money, apparently.

Another 19.6% of you bought BTC, the old faithful. And I appreciate the sole Great One out there who went with DOGE during the dip. There’s always one, ya dog.

Y’all let me know how your crypto adventures work out for you, cool?

Tell your tales of crypto woe or glory over at GreatStuffToday@BanyanHill.com. Now on to the show.

We’ve been talking up this tangled web woven by AMD and rival Intel — this duel of the data center fates, if you will. Intel basically warned that it’s losing ground to its competition, and today’s report from AMD confirms just what competition Intel was freaking out about.

But I know many of you still fly the Intel flag … so to speak. Something about CEO Pat Gelsinger’s rosy turnaround dreams just speaks to you. I mean, Intel was a Great Stuff Pick for a reason. It’s just not a current pick like AMD is … also for a reason.

That’s why today, for the sake of the data center market’s future, it’s time to choose your fighter:

Of course, if you have more to say, by all means, say it! We have an inbox ready to receive your ranting and raving, your dialogues and diatribes.

Drop us a line at GreatStuffToday@BanyanHill.com. You might just see your hot takes in tomorrow’s edition of Reader Feedback!