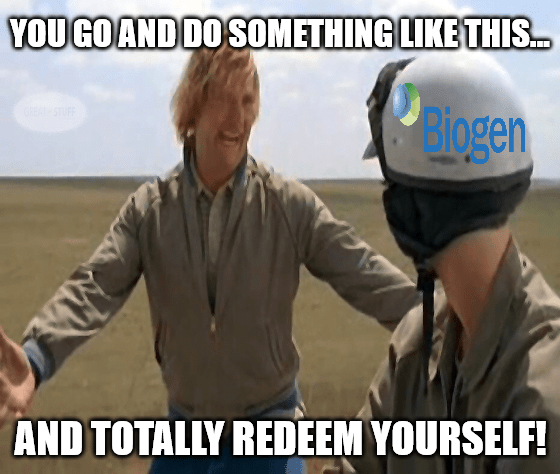 Great Ones, so this ain’t the end, I saw Biogen (Nasdaq: BIIB).

Today, I had to turn my heart away.

The news smelled like the sun, BIIB for everyone. And tales … it never fails.

Um, that’s not how you spell “Barracuda,” Mr. Great Stuff.

Yeah, my jukebox is wonky again this morning. But I didn’t have the heart to tell it no…

As you can tell, I’m in a much better mood about this whole Biogen/Alzheimer’s situation today, and that’s because this new drug actually appears to work!

Not like that last one, Aduhelm, that was only “reasonably likely” to work … and sported a price point that made you want to forget you ever heard about Biogen’s Alzheimer’s drug program.

Some of y’all might remember that Alzheimer’s is a disease that hits rather close to home for me. I lost my grandfather to Alzheimer’s about 15 years ago. Without him, the Great Stuff y’all know and love would probably be a lot different.

My love of pop culture references began with him, or with me reciting lines of our favorite movies back to him … and him laughing about it. Even toward the end, he still recognized my movie and song lyrics, even if he couldn’t always remember me.

Great, now I’m verklempt. Driveways are neither for driving or a way to somewhere else … talk amongst yourselves…

For those of you who haven’t heard the news yet, Biogen and its Japanese partner Eisai just released Phase 3 trial results for their new Alzheimer’s drug lecanemab — like anyone is gonna remember that name.

Everyone will, however, remember the Phase 3 results, which showed a 27% reduction in cognitive and functional decline compared to a placebo. In layman’s terms, that means that lecanemab isn’t just “reasonably likely” to work — it actually works!

In investor’s terms, lecanemab is a potential gold mine. “We think that lecanemab holds mega blockbuster potential, likely in the $6-8 billion range,” Guggenheim Analyst Yatin Suneja told clients in a research note.

You know that Biogen is just giddy with excitement that it actually has a working Alzheimer’s drug now. But CEO Michel Vounatsos was restrained on the revenue potential, instead focusing on the hope that lecanemab provides:

Today’s announcement gives patients and their families hope that lecanemab, if approved, can potentially slow the progression of Alzheimer’s disease, and provide a clinically meaningful impact on cognition and function.

Meanwhile, the FDA is already reviewing lecanemab for conditional early approval. With about 6.5 million adults in the U.S. already living with Alzheimer’s, this is excellent news.

But those billions in potential sales won’t all go to Biogen. Remember its Japanese partner Eisai? Yeah, it actually created the drug and owns the rights to it. I’ll let Guggenheim’s Suneja explain the situation:

One caveat to this program vs. Aduhelm is that Eisai owns the asset and will record revenues globally (Biogen gets 45% profit split). …Biogen and Eisai will co-promote lecanemab and share profits equally, which limits the peak opportunity to Biogen. 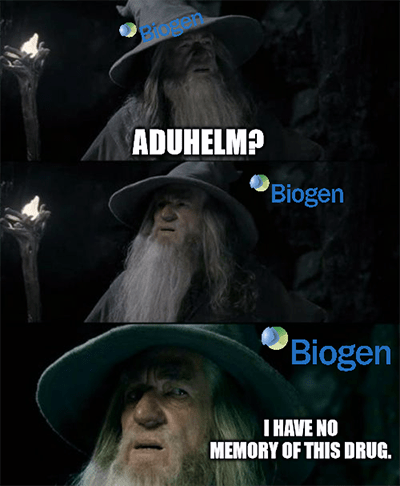 So Biogen won’t get the whole enchilada when it comes to lecanemab’s revenue. It’ll only get about 45% of those billions. Aww … poor Biogen’s only going to get 45% of $8 billion in potential peak sales.

If the real thing don’t do the trick, Suneja, you’d better make up something quick. Personally, I’d rather not see Biogen burn this one to the wick. Oohh, lecanemab … yeah!

More lyrics are always good, of course. But should we buy BIIB?

If this were a normal market, I’d be screaming “Buy!” right now before the FDA weighs in on conditional early approval. And if you have both the risk tolerance and the extra investing capital to weather this crazy market, sure … BIIB is a buy on today’s news.

Ride that lecanemab wave, just be sure to keep a close eye on the stock and take profits where appropriate — probably after FDA early approval.

But seeing as how this is anything but a normal market, check this out instead: 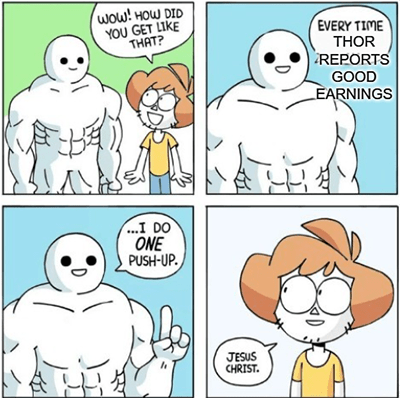 Stop me if you’ve heard this one before…

So what’s the skinny? Do analysts just have low expectations or is Thor just that good at selling RVs?

If all this sounds a bit familiar, it should. Pretty much every report from Thor has looked like this since the beginning of the pandemic, thanks to insane RV demand. And it shows no sign of slowing down either. Thor keeps improving its margins, top-line figures and bottom-line figures. What’s not to love?

Ah, yeah, that’s the real growth stock stuff I like.

And from an RV maker, no less! Though, as y’all Great Ones know, we don’t go chasing waterfalls … or earnings rallies.

Neither does Charles Mizrahi: For the first time ever, Charles is going to reveal why he’s putting his own money in a group of investments he calls … Super Stocks.

Super, because you can invest in them before Wall Street, giving you the chance to flip the script and stack the odds in your favor.

Super, because they’ve trounced the market 6 to-1 … not just for the last 10 years or even 20 years … but for close to a century.

The Bad: Fanboys Doth Protest Too Much 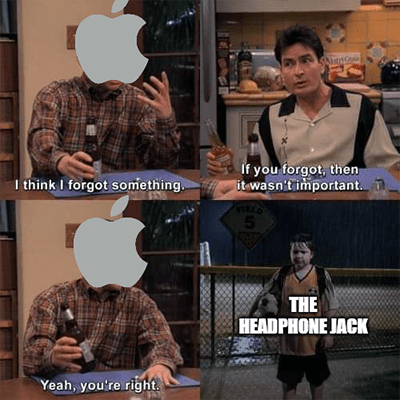 What’s this? Apple’s (Nasdaq: AAPL) ever-so-incremental iPhone developments aren’t selling as many units as they used to?

Word on the Street has it that Apple told suppliers to cut back on iPhone iProduction by up to 6 million iPhone 14s.

Instead, Apple’s only going to make as many iPhones as last year, about as much as Apple itself predicted back during the summertime. The nerve! How could Apple merely fall in line with expectations? We need year-over-year growth here, dang it.

Mind you, none of this news is coming from Apple itself.

The plans aren’t public yet — too late — and we’re only hearing about it through “the people.” We’re not even hearing from “the people familiar with the matter” at this point. It’s just … “the people.”

According to “some of the people,” there’s more demand for the higher-end iPhones rather than the discount models. I mean … I’m not surprised by that, these are Apple consumers we’re talking about here.

I just want to know who these mysterious moles of information are, if not Apple’s suppliers themselves. “The people” want to know.

The Ugly: Barbarians At The Lionsgate 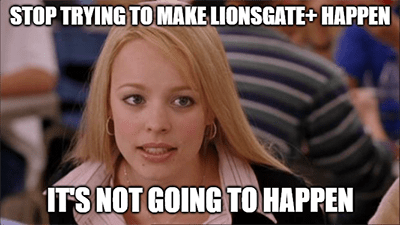 So. Much. Spinning. Off.

That’s the main takeaway for anyone trying to follow along with Lionsgate’s (NYSE: LGF.A) latest saga — its spinoff-a-thon, if you will.

The company announced that it’s thinking of spinning off its studio division instead of its Starz streaming service. Lionsgate had originally “teased” a spinoff or sale of Starz, set to finalize by the end of summer, but it’s looking like the studio side of the biz might be easier (and faster) to sell a stake in.

Now here’s what I don’t get. Lionsgate is one of the few companies out there that has a leg in the streaming space and a studio that makes bona fide in-demand content — a pretty potent production pairing. (Just ask Disney.)

But if Lionsgate sells off either side of the business … or both, since it still really wants to sell Starz, deep down … what is actually left?

Of course there would be a lot more interest in buying a stake in the studio side of Lionsgate — Lord knows there are already too many streaming services. Everyone who wants a streaming service already has one.

I told them we’ve already got one.

But an actual movie/TV/whatever-content-have-you studio? Why, those are much harder to come by. Everyone in the streaming space wants a studio to make exclusive content in-house for their streaming service. It’s kinda the only way to get people to your service in the first place.

Lionsgate basically has what all the major streaming services want, but it doesn’t know how to use it. Like … at all. And sure, selling off the business would “unlock shareholder value” for a little while … because you’re selling off the whole business. But what are you left with?

You ever see a lion cut off its snout to spite off its face? It looks a lot like this.

Meanwhile, the company is more preoccupied with rebranding Starz as Lionsgate+ because that’s what all the cool kids did, and now nobody’s a cool kid.

Can we start a petition to ban the “plus” name scheme? It’s double-plus-ungood.

What do you think, Great Ones? Got any thoughts on today’s Great Stuff? Head on over to our inbox to share your side of the conversation: GreatStuffToday@BanyanHill.com.