Burning Down The Housing Market; Tesla’s Trouble Is Just Getting Started 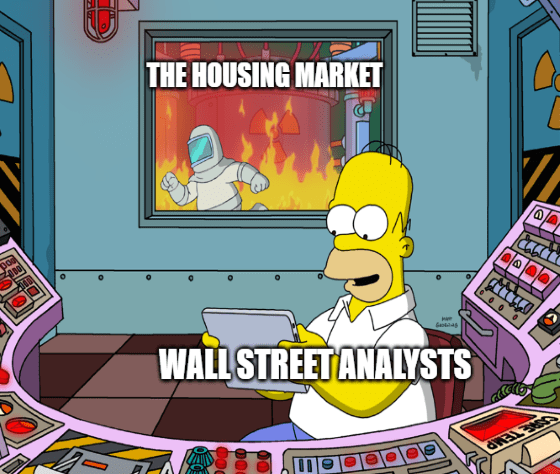 Happy Thursday, Great Ones, and welcome to another Thursday Throwdown, where — oof, good God, what’s going on with the market?!

If you couldn’t tell by now, the Fed ratcheted up interest rates yesterday … and Wall Street is none too happy about it.

(Well, it was initially relieved after yesterday’s announcement, but that relief rally fell flatter than flat, and today we’re definitely not meant to be happy, as these things so often go. Anyway…)

While the market tries to bear today’s plunge, it’s time we turn our attention … elsewhere.

Oh, sweet, you talking about Chipotle’s new Mexican cauliflower rice? Or that Baja Blast is back at the supermarket?

Ummm. No, and we’re going to go right past both of those. Though, feel free to grab a snack (not cauliflower rice) because today’s dive is deep into the market abyss. We’re talking about the housing market.

Great Ones, two key pieces of info were released today that scrambled investors’ stomachs (and they were not from Chipotle).

Housing permits — the initial authorization to build — fell 7% from April to May, coming in at about 1.7 million. Thing is, analysts only expected the number of permits to drop 1.3% in May. That’s more than a bit off. And that’s only half of the damaging story.

Housing starts — the first dig to start building the home’s foundation — fell 14.4% in the same time frame to total 1.6 million. As you might’ve already guessed, analysts were way too optimistic again, only predicting a 0.5% decrease in housing starts. That’s insanity.

In other words, the pace of new-home construction is falling more rapidly than the pace of permitting said houses. And both metrics are falling far more than analysts ever expected. I mean, these are substantial drops for housing starts and permits, just in the span of one month.

Wall Street might be able to afford the ever-inflated cost of housing. But us? You and me? The homebuyers down the street? That’s a big, fat “nope.”

Remember what Great Stuff noted about the housing market just a couple of weeks ago:

If it weren’t for the easy money and low rates, we’d have seen housing demand slack off considerably already.

Right now, only the most well-off and financially secure are buying houses. The rest of the U.S. housing market — i.e., consumers like you and me — ran out of money for big spending late last year.

Well, guess what? Demand is now slacking off — some might say considerably so.

Just like Robert Johnson, we are at a crossroads. So far, homebuyers have been ready to hand over all their cash and sell their souls just to get that new house. And homebuilders, while struggling, were able to at least partially meet demand … thus far.

But now? We may be reaching the point where people finally give up the chase, holding off on the homebuying until “things settle down a bit,” a lie said with less and less optimism each time.

Houses were too expensive before. Now they’re too too expensive. The cracks are beginning to show weakening demand, but that’s only one part of a growing problem here — and the homebuilders know it.

Remember how we said the Fed can’t fix everything? Yeah … about that.

Rising interest rates are pricing out some of the insane demand, sure. But the supply chain woes for construction materials still plaguing homebuilders? Materials getting more expensive by the day? These aren’t exactly problems the Fed can solve so easily.

Shake it all up in a stanky snowglobe, and you have dark clouds lurking toward the new-home market.

It’s no wonder why homebuilding stocks were struck down like clay pigeons today:

Even homebuying stocks like Zillow (Nasdaq: Z) and Redfin (Nasdaq: RDFN) were sent careening into the market’s red sea.

Thing is, it’s going to get a whole lot worse for housing investors before it starts to get better — you can take that to the bank (or what’s left of it, when the Fed’s done fiddling with rates).

In the meantime, you need a way to safely navigate this new bear market territory we’ve found ourselves in. And to do that, you need Mike Carr.

To see the unstoppable power of Mike’s Greed Gauge in action, click here.

Turns out Revlon’s racked up quite a bit of debt during the pandemic, to the tune of about $3.3 billion.

And with supply chain snarls ripping Revlon a new one, the company’s unable to fulfill roughly one-third of its product demand, with many essential ingredients taking anywhere from eight to 12 weeks to sail from China.

Rather than shut down its entire operation permanently, Revlon’s banking on its existing lender base to cough up enough cash to keep day-to-day operations afloat. Seems a little presumptuous if you ask me … but then, no one asked me.

Thing is, if I were a Revlon investor, I’d pay more attention to what management’s saying — or rather, not saying — about this latest mishap.

I mean, CEO Debra Perelman said the quiet part out loud about how Revlon got into this mess in the first place: “Our challenging capital structure has limited our ability to navigate macro-economic issues in order to meet this demand.”

That, Great Ones, is the clear sign of a management problem. But sure, keep putting all the blame at the pandemic’s feet, Perelman. 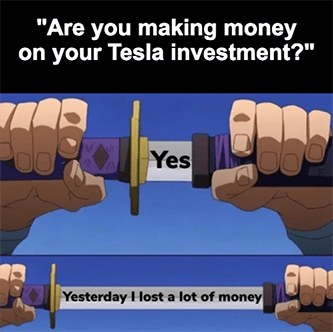 Tesla (Nasdaq: TSLA) investors, how y’all doing out there today? Everything all right at home? In your portfolio?

Anything you wanna get off your chest about the company’s latest landslide? I figured I’d ask before we get to the meat of the matter with today’s Tesla chatter: Tesla’s domestic prices are going up (and as a result, its stock is going down).

If you recall, Tesla already teased more expensive electric vehicles (EVs) earlier this year — and back then, no one batted an eye. But now? When everyday consumers are struggling to stay afloat from month to month?

Yeah … that announcement didn’t go over so well this time ‘round. If I had to guess, the *gulp* $6,000 price hike on certain Tesla models probably had something to do with it.

Now, I understand raw materials costs are going up. But if the EV maker isn’t careful, it’s going to price itself right out of middle America’s budget, where most of its market potential lies.

Add to that the 10% staffing cut the company announced earlier this month and new rumors about the legitimacy of Tesla’s delivery rate … and let’s just say we’re glad we never added TSLA stock to the Great Stuff Picks portfolio.

After all, there are safer ways to benefit from Tesla’s talent — and no, I don’t include Elon in that lineup:

A former Tesla employee released a brand-new innovation promising to make every EV out there instantly obsolete. Some call this man “Employee No. 7.” Even the “Godfather of the EV Revolution.”

He created the first working Tesla battery. Now he’s about to change everything again.

Let’s start with the good news first. While consumers have cut back on unnecessary purchases amid rising everything prices, Kroger benefited from the continued strength in consumer staples — with grocery store sales up 8.5% so far this year.

The problem with Kroger’s report came down to same-store sales, which fell short of Wall Street’s 3.2% forecast.

Still, investors got enough of their essential wish list items to make a meal of Kroger’s stock and thus “rewarded” the grocer by being down just 0.37% today.

Considering other stocks have gotten hammered by this week’s bear market meltdown, a mere dip into the red zone really isn’t all that bad — especially for a retailer.

Disney ‘Til You Drop 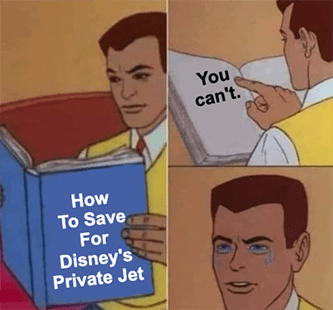 I hope you’ve been saving your spare change, Great Ones, because adventure awaits! Well, for those of you with an extra $109,995 to spend…

The latest in luxury travel comes from none other than The Walt Disney Company (NYSE: DIS), which added a new “private jet adventure” to its tally of travel destinations.

A lucky — and did I mention wealthy? — group of 75 jet-setters will travel around the world in 24 days, where they’ll get to visit all 12 of Disney’s theme parks across six different countries — all while seeing pretend versions of the world’s greatest wonders!

Why visit the real Taj Mahal or pyramids of Giza when you can rendezvous at their replicas for 10 times the price? That’s tourism, baby!

Did they add a few extra sprigs of cilantro to your Chipotle salad today? You’re starting to sound a bit bitter.

Nah, I say if you’ve got the money, spend it however you want to. God knows we could all use a little more joy these days, and Disney’s “the happiest place in the world,” don’t cha know?

But now I’m curious: If money were no object, would you rather theme park-hop between each of Disney’s digs or choose your own adventure like a modern-day Marco Polo?

There are no wrong answers, only different perspectives!

GreatStuffToday@BanyanHill.com is where you can sound off and simmer down. If you’ve got an opinion, we want to hear about it! So go ahead and drop us a line.