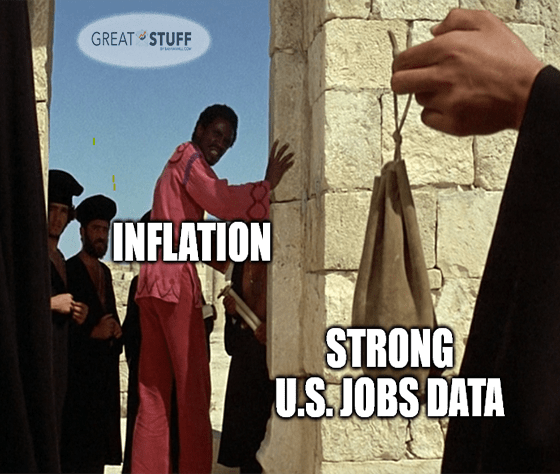 Blessed Are The Cheesemakers

My mind is clearer now. At last, all too well, I can see where the market soon will be. If you strip away the pandemic from the plan, you will see where we all soon will be.

A little Jesus Christ Superstar for your Good Friday edition of Great Stuff. We’re gonna keep this short today because the market is closed, and I know you’ve got places to go and people to see for the holidays.

However, Wall Street still has a few eggs for your basket before we officially kick off Easter weekend. For instance, the Labor Department said this morning that the U.S. added 916,000 new jobs in March  — the fastest jobs growth in seven months. 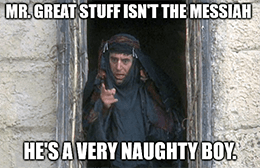 Wall Street economists were, once again, caught flat-footed, expecting no change in the unemployment rate and an increase of only 675,000 jobs.

But I think analysts are getting ahead of themselves. We’re still several million jobs away from respectable U.S. employment levels. And while economic growth is surging lately, it’s important to remember that, when you start at the bottom, all growth looks impressive.

I predict that we will see rapid economic growth over the summer as the “Great Reopening” adds jobs and unleashes pent-up demand. This will lead to short-term inflationary pressures, as I’ve noted before.

However, that growth will hit a significant roadblock as the U.S. economy approaches pre-pandemic employment levels and stimulus cash runs out. After all, most of the jobs the U.S. economy is adding right now are in the service sector — you know, all those people who were laid off due to pandemic closures?

The real test comes once those jobs are filled. Then we’ll see if Wall Street’s inflationary fears are warranted and exactly how much hutzpah the U.S. economy really has.

But then … I’m no economic messiah. I’m just this guy, you know?

If you want to hear from a real economic expert, might I suggest my good friend Ted Bauman?

For two years, Ted and his team poured blood, sweat and tears into developing Flashpoint Fortunes. They aimed to help people make more money in a single trade than 95% of investors will make in five years … then do it over and over again.

If you want to see what all the fuss is about and give Flashpoint Fortunes a try for yourself, click here now!

The most impressive feat here is that Tesla beat these expectations during a global chip shortage that’s idled even the dons of Detroit. And the fact that Tesla expects to keep growing its delivery volume by 50% each year concerns me more than it impresses me. Tesla still faces a lack of charging stations across the U.S., which is Tesla’s next big hurdle to meet that 50% average annual growth rate.

Never one to be outdone, Nio (NYSE: NIO) went and broke some delivery records of its own. Nio delivered its best quarterly sales ever while also setting a new record for March deliveries — 7,257 vehicles compared to January’s high-water mark of 7,225 vehicles.

Though, the company isn’t as optimistic as Tesla is about growing its vehicle volume due to — you guessed it — the global chip shortage!

If you’ve never heard of Cal-Maine Foods (Nasdaq: CALM) … it makes eggs. That’s it. Well, Cal-Maine’s chickens produce the eggs; you get the gist. Cal-Maine also laid down an eggshellent report back on Monday, with earnings quadrupling expectations to offset a slight revenue miss.

The yolk folks pointed toward stronger demand from at-home cooking and baking on the quarter, but average shell egg prices-per-dozen are a whole penny higher than they were last year — the travesty!

In fairness, I’ve had to incubate on the news all week because it’s just that eggsciting of a topic. The market panned the report, however, and CALM shares have been trading on eggshells all week.

Wait no more: Coinbase finally settled on a day to hit the public markets after recently receiving SEC approval. The cryptocurrency exchange is going public via direct listing — slightly different than an IPO, mind you — and will trade on the Nasdaq as COIN.

If you were looking for another way in on blockchain and bitcoin without buying the shiny, virtual gold for yourself, buying one of the biggest crypto exchanges is one such idea if you wanna wait another two weeks.

But for a way in on the blockchain game that’s already right here, right now — click here!

So, as I go hunt that one jelly bean that rolled off my desk earlier … what are you doing to get in on the bitcoin boom? The crypto clamor? The blockchain blast-off? Whatever you call it, we want to hear all about the trades in your sights and the thoughts on your mind.

Drop us a line anytime at GreatStuffToday@BanyanHill.com

And for all those numerous readers writing in saying “Add me!” or “Sign me up!” … first off, how’d you receive this? Second, all you have to do to sign up for Great Stuff is click here!

And don’t forget! If you want to be in next week’s edition of Reader Feedback, drop us a line at GreatStuffToday@BanyanHill.com! But, if that’s still too many virtual hoops to jump through, why not follow along on social media? We’re on Facebook, Instagram and Twitter.