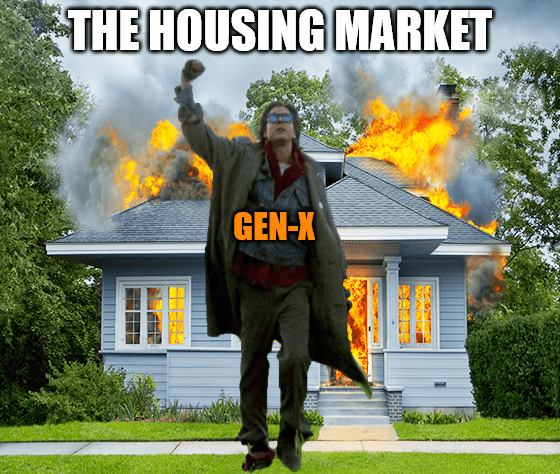 Friday Feedback: The “X Ain’t Gonna Give It To Ya” Edition

Overture. Email fights. This is it, we’ll hit the heights.

And oh, what heights we’ll hit. On with the show, this is it!

Umm … what time is that Mr. Great Stuff?

It’s time for “The Greatest Show In Finance!”™

Anywho, today is Friday Feedback day! The day we dive into the Great Stuff inbox to answer your burning stock market questions and indulge in investing rants!

But you can get in on the action next week! Just drop me an email at GreatStuffToday@BanyanHill.com … and we’ll do the rest.

Now, without any further ado: On with the show, this is it!

Sir Joseph (you can declare such titles when you live in nowhereland)Re: your assessment of the housing market…… it may be the second time this decade you’re wrong (but your wife might have a different tally….). The previous bubble was based on over-supply and crap-credit scams (go watch The Big Short again!).

This acceleration is based on under-supply, a cash bubble, pandemic madness, severe shortages in building materials, greedy NIMBY zoning that makes building more sensibly sized (and priced!) homes and apartments exceedingly difficult, and predatory Hedge Funds hoovering up anything in sight. None of those issues is bubbly.

Now rising interest rates may slow, and likely reduce prices, but not significantly because there is such a severe shortage of housing!

Add into that the GenX crowd — the largest segment of our population — is in prime home-buying years, and you get a stalled market until inflation or interest rates decline. I don’t see the Lehman issue in any of the components driving this admittedly wild increase in home values.

All that, and I still love your gig despite Hyzon being down 44% after this week’s rally! Perverse joy in being patient….

And that’s “Mr.” … not “Sir.” As my grandfather used to say: “I’m no ‘sir.’ I worked for a living.” Though I do like making up titles for myself here in “nowhereland.” It’s like “never never land,” except they make you grow up.

Anywho, Tim, I know why and how the 2008 financial and housing crashes happened. I saw it coming in 2006 and 2007. I was there. I wrote about it. (And if you happen to find that bullish housing article I wrote back in early 2008, ignore that. I was forced to write that. Just saying…)

I know that this time isn’t the same. We aren’t looking at a leveraged financial meltdown like last time. If 2008 had just been about a housing bubble, the fallout wouldn’t have been anywhere near as bad. 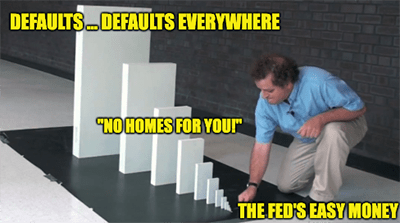 But just because we aren’t facing the same kind of financial nightmare doesn’t mean that the housing market isn’t in a bubble. Easy money and low interest rates combined with short supply, supply chain issues and rampaging inflation are our foes this time around.

If it weren’t for the easy money and low rates, we’d have seen housing demand slack off considerably already. Right now, only the most well-off and financially secure are buying houses. The rest of the U.S. housing market — i.e., consumers like you and me — ran out of money for big spending late last year.

That is the problem I see for the housing market. And when housing prices fall, consumers have less equity to tap into for additional spending. In other words, we’re looking at a snowball effect for the entire economy.

Now, will it be as bad as the 2008 bubble/collapse? I don’t think so. But it is something we all need to be prepared for … especially if you’re considering buying a house right now.

There will be defaults. There will be major stresses on banks and financial institutions. But we’re likely not going to see a repeat of 2008.

So I think we’re saying almost the same thing, Tim. We just differ on the severity of the situation. That said, you literally made me laugh out loud with this line:

Gen X is the largest segment of our population? 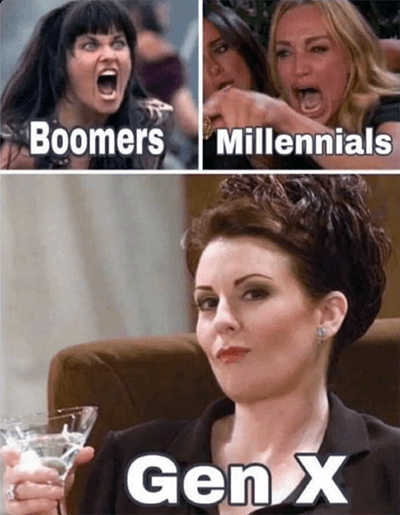 I’m pretty sure you meant millennials, but man … as a Gen Xer myself, that was hilarious.

There aren’t enough of us to make much of anything happen in any market or movement … and that’s if you can manage to dig us out of our houses/apartments in the first place and convince us that something needs to be done.

We should literally be called the “leave us alone” generation because it’s what we’re used to.

Also, we’re in the 40+ range now as well, with some of us closing in on 60. We’re well past our prime home-buying years. (Those were back around 2008, of course.) We’re looking for a final resting place at this point, man.

So, Tim, I’ll leave you with one final note … a bit of Gen X-defining wisdom, if you will: I see your point, I just don’t agree with it.

Thanks for writing in!

Now For Something Entirely Different…

During this special event, Adam O’Dell will reveal — for the very first time — a trading strategy he’s developed that’s designed to target 1,000% gains on stocks in only one year.

Click here to register for the “10X Fortunes Summit” on June 9 at 4 p.m. EDT and see this strategy in action!

Alright, now that we’ve scared off all the prospective homebuyers (sorry, but it is what it is), let’s see what else is rattling around the inbox this week:

Will copper be a good investment?— Nancy D.

Nancy, you sound like a woman of few words, so I’ll get right to the point.

Copper has always been bounced around as a “good” investment idea because of the metal’s multifaceted uses — be it in home building, electronics, autos, etc.

It’s one of best and cheapest conductors on the market. So if you name something with an electrical component, there’s a good chance copper’s in it. 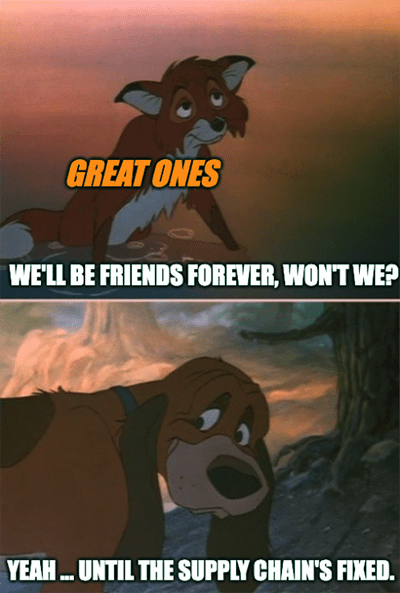 Now, two of the biggest industries that rely on this burnished brass have exploded in the past few years, those being the housing and automotive markets — especially with electric vehicle (EV) production ramping up.

And copper demand has climbed right along with them.

In fact, had you gotten in after the March 2020 crash, you’d be sitting on a pretty penny right now because copper prices are nearing 22-year highs.

But how long will costs remain this elevated?

Well, if you believe the EV market and other alternative energy projects are still in their early stages — and I do — then that demand alone should prop copper prices up for the foreseeable future.

But once those supply chain issues are gone, the spice … erm, the copper will start flowing once again. And that’ll bring prices back down a bit.

So I’d approach copper as a good investment option over the short to intermediate term while supply chain issues persist. But from a longer-term perspective, copper’s prices will surely come down again once the supply chain normalizes.

Copper sells for roughly $4.55 per pound today … but I could see this dropping to the $2 to $3 region before finally leveling out.

So yes, copper could pad your portfolio nicely right now. But prepare to keep an eye on that global supply chain … and act accordingly once lockdowns loosen.

Thanks for writing in, Nancy!

Let’s Get Down To Brass Tacks

Get the full story right here.

WHY ARE WE YELLING

ELECTRIC POWER FOR EV CARS. WERE WILL IT BE COMING FROM? WE DO NOT HAVE ENOUGH RIGHT NOW! ATOMIC PLANTS? COAL GENERATORS? OIL? GREEN WILL NEVER BE ENOUGH!

THE EV TRANSITION WILL BE GRADUAL. IT’S NOT ENTIRELY “CLEAN” ENERGY NOW … THAT’S WHY GREAT STUFF INVESTS IN ALTERNATIVE ALTERNATIVE ENERGIES. BATTERY POWER, HYDROGEN POWER — WE NEED IT ALL.

A FEW OF YOUR FELLOW GREAT ONES HAVE BEEN WRITING IN ABOUT NUCLEAR ENERGY… “ATOMIC PLANTS” SOUNDS COOLER THOUGH.

POINT IS, IT WILL TAKE MULTIPLE MEANS OF PRODUCING ENERGY TO REPLACE THE OIL FUELING CARS — AND THE COAL POWERING POWER PLANTS.

IF ANYTHING — alright, this all-caps thing was funny at first, but now it just looks aggressive — hydrogen power would be the most adaptable to our current oil-based infrastructure. No matter what Elon Musk or the “but the Hindenburg!!!” crowd claim.

The need for new energy sources is bigger than just charging cars. It’s about changing the grid, which is the crux of your email. (Or at least I think it is.)

That’s why some utilities companies like NextEra Energy are experimenting with, you guessed it, hydrogen to help wean off the coal, just like I need to wean off the Reese’s. But what do you think, Great Ones?

Remember, you too can join in the Friday Feedback fun by sending your questions, rants and market insanity to GreatStuffToday@BanyanHill.com.

And once you’re done yapping our virtual ear off in the inbox, catch up on all the Great Stuff you might’ve missed online at GreatStuffToday.com!