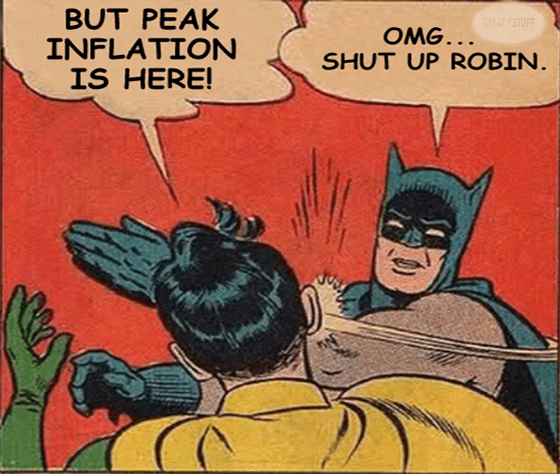 And That Was All She Wrote…

Great Ones, I woke up late after last night and I knew right away something wasn’t right. Inflation had blown.

It took all I had and blew my portfolio apart … should have known it’d go bad right from the start. Where did we do wrong?

Y’all know this Firehouse song? I know at least one Great One does — AJ, I see you out there sending me Firehouse lyrics … and I’m loving it!

Yes, we’re talking about inflation again today. How could we not?

The consumer price index (CPI) just surged 9.1% last month, according to the Bureau of Labor Statistics. That’s well above the consensus estimate for an 8.8% rise.

Even the so-called core CPI — which removes food and energy from the equation — came in hotter than expected, up 5.9% versus Wall Street’s target for a 5.7% gain.

Or when analysts pointed toward April’s slowing CPI as proof that peak inflation was nigh and that the Federal Reserve’s aggressive rate hike plan was starting to work?

But I don’t have to tell you that. You already knew. After all, you don’t have time for that “core CPI” nonsense … cause, you know, you’ve got to eat, drive to work and keep the lights on.

There are a multitude of reasons why inflation continues to accelerate: lingering supply chain issues, labor market issues, lingering pandemic shutdowns in China, excessive amounts of cash from the Fed’s money printers still sloshing around in the economy, etc.

But there’s one particularly ugly inflationary driver that most financial publications are sweeping under the rug: record-high corporate profits … particularly in the energy sector.

Go back and look at the CPI breakdown and you’ll see that energy prices led the way with a 7.5% spike in June … and a whopping 41.6% surge since last year. I’m sure all of you are aware, but oil and energy prices are an input cost on literally everything we purchase — from bread to airline tickets to clothing, all of it.

Now, we can argue about the reasons for sky-high oil and gas prices all we want: It’s the Russia/Ukraine war! It’s a complicated supply chain process! It’s not enough drilling incentives! It’s [insert conspiracy theory here]!

The thing is … if the costs to bring oil and gas to market were rising that much, you’d expect profits and margins to come down, right?

But that’s definitely not what’s happening. Shell, Exxon Mobil, BP, Chevron and ConocoPhillips saw their profits skyrocket 300% in the first quarter of 2021. And those gains are continuing into 2022, with Chevron and Exxon Mobil reporting net profit margins of 12.3% early this year.

The fact is energy companies’ profits and margins are growing … not falling. Now, I could accept stagnant growth to maintain operations. But profit and margin growth right now for these companies just feels wrong.

I know that as a “good little financial writer,” I’m supposed to cheer higher profits. I’m supposed to push the idea that what’s good for Wall Street is good for you … you know, so your retirement and investments continue to soar.

But this … this quote from CNBC’s CPI article is just infuriating:

Corporate profits, however, have increased just 1.3% in aggregate since the second quarter of 2021, when inflation took hold. 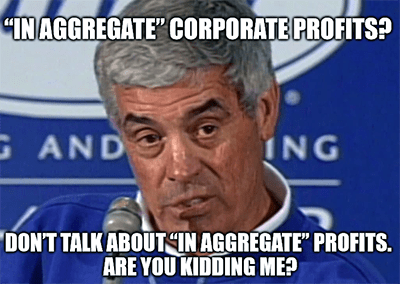 Oh, so “in aggregate” corporate profits are only up slightly … less than inflation even? I guess that means there’s nothing to see here.

I have no idea how CNBC can say that with a straight face. In aggregate?

“In aggregate” means that if 100 companies post losses of $10 million each, but one company posts a profit of $1 billion … nobody made any money and corporate profits are flat. Do you see how ridiculous that is?

In aggregate … seriously. You know, Wall Street, it’s impossible to fix a problem until you acknowledge that you have one. And this “profit at all costs for short-term gains” addiction is going to literally destroy a lot of Main Street investors … and Main Street consumers.

So, Great Ones … let me ask you this: Is it different enough for you this time?

Let me know at GreatStuffToday@BanyanHill.com.

The market’s historical average over the last 100 years is roughly 8% to 10% per year.

Mike Carr has developed a strategy that has averaged 21.7% per trade over a six-month period during his beta test, more than DOUBLE that amount — all while closing a new trade every WEEK on average.

The Good: United We … Game?

You thought Microsoft was the only tech company going stock shopping this year? No, sir!

With the market being … you know … how it is, tech stocks are at fire-sale prices, meaning the time for massive mergers and acquisitions is nigh.

Today’s matchup? 3D content platform Unity Software (NYSE: U) is snatching up ironSource (NYSE: IS), a company that helps mobile content creators scale up their businesses.

Hmm, yes, I know some of those words.

I know it’s a lot to unpack, so let’s sort through the whole shebang.

You might remember Unity from Great Stuff’s list of “5 Stocks To Rule The Metaverse,” as its platform helps developers create 3D content, typically for gaming. For a metaverse that bills itself as an omnipresent online world, you can see how Unity’s software is more than handy — it’s a necessity.

Then you have ironSource, which makes tools for “cross-channel marketing” and distribution. In other words, it helps brands grow across multiple platforms, which pretty much every company wants to do with the metaverse.

When all is said and done, ironSource will be a subsidiary under the Unity umbrella. As you’d expect with any tech merger these days, there’s the usual fanfare of shared software development, analyst hype and an ever-growing list of corporate buzzwords.

How does “$300 million in annual EBITDA synergies” from this “highly accretive merger” sound to you? It didn’t sound so sweet to Wall Street though, which struck U stock down 16% today. Don’t be fooled: This merger will indeed be highly accretive for Unity, even if investors don’t quite see that yet.

As for the stock’s overreaction, like I just said … have you seen how the market has treated anything related to tech lately?!

The Bad: Don’t Come Fly With Me

If you could use some exotic booze, it’s gonna cost you a bit more than usual to get to that bar in far Bombay.

Sinatra? Really? Did you put on your trilby for this one?

Hey now, once Delta Air Lines (NYSE: DAL) gets you up there … they’ll probably try to nickel and dime you for every ice cube and peanut consumed.

If you thought your fuel purchases were getting expensive, you do not want to be an airline right now. Oof.

Delta kicked off earnings season with a lukewarm report — just as expected given exorbitant energy costs.

Revenue came in higher than expected ($13.82 billion versus estimates for $13.57 billion) as travelers coughed up the dough for higher ticket prices. Earnings, on the other hand, missed expectations, coming in at $1.44 per share versus estimates of $1.73 per share.

Since we already know CNBC likes to cherry-pick its figures, check this out: “In a measure of how high fares have risen, Delta flew 18% less capacity in the second quarter than it did in the same period of 2019 but it generated $13.82 billion in revenue, 10% more than three years ago.”

Hold on, let me grab my calculator.

I’ll save you the trouble: Delta’s issue is fuel prices. Period. It tried to cram a whole year’s worth of flights into a tiny travel window so that it could make as much money as possible before rising fuel prices really sunk its profits.

Thing is, Delta had to cancel or delay many of those flights, which sank its profits anyway. That’s what happens when you try to ramp up way too quickly before your labor issues are settled. Or to use CEO Ed Bastian’s wording: Delta “pushed too hard” and now it’s bleeding red.

I’m … I’m not even gonna touch that one.

The Ugly: Not Another NFT SNAFU

One of these days, Snap (NYSE: SNAP) is gonna make it out of the Ugly section and into greener pastures. But today is not that day.

The social media company that wants investors to take it seriously is now in its second decade of existence, and it’s still trying to figure out how to get the platform to — what was it called again? Make money? Yeah, that.

I’m not even a SNAP investor and it pains me to say: The oh-so-forward-looking folks at Snap actually brainstormed ideas on how to make Snapchat more profitable and, without any sense of irony, landed on … sigh … NFTs.

Well, you tell me. According to people familiar with the plans, Snap wants NFT artists — I hate to know what that really means — to put their designs on Snapchat as augmented reality filters.

Because if you’re gonna go through the effort of making a new dog-ear selfie filter, you should at least protect that work of art with an NFT … right?

Now, if you’re like me, you’re wondering how this is supposed to make Snapchat more money … here you go: “Snap is also planning to charge creators for presenting NFTs in addition to exploring third-party partnerships to help creators in monetizing their NFT designs.”

Now, if you’re like me, you’re still wondering how this is supposed to make Snapchat more money. Snapchat’s reasoning might very well amount to: Everybody else is losing money on making NFTs, so why not join the herd?

Maybe soon you too could fulfill your dream of being turned into an augmented-reality bored ape for your Snapchat selfies. What a time to be alive.

And that’s all she wrote, folks. If you’ve got thoughts on any of today’s hot topics, join in the conversation in our inbox! Whether you’re ready to rant about NFTs, inquire about inflation or simply spin the yarn … write to us!

GreatStuffToday@BanyanHill.com is where you can reach us best.

Isn’t it about time you joined Great Stuff in the upside down of the social media world?

I may not be “Eddie Munsen playing Master of Puppets in the upside down” cool — nobody’s ever going to be that cool again — but I can hold my own.

So quit chopping your breakfast on a mirror and come crawling faster on your way over to Great Stuff’s official TikTok!

Bet you weren’t expecting that now, were ya?

Yes indeed, if you wanted all the market memes and stock shenanigans you get in Great Stuff but in an even more condensed soup, check out our TikTok now. If you like what you see, make sure you follow Great Stuff so you don’t miss out on any Greatness.

Otherwise, here’s where else you can find us across the interwebs: