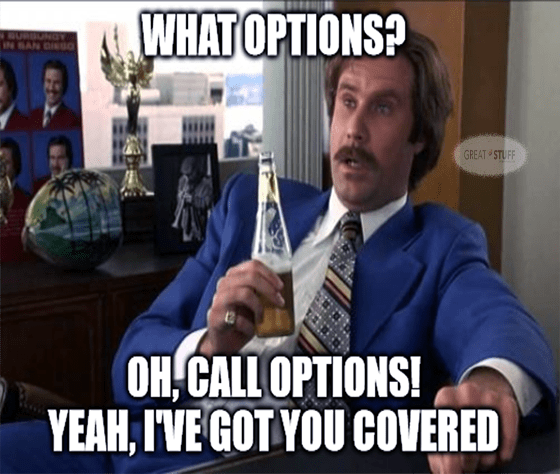 Friday Feedback: The “Return Of The Weeshump” Edition

Welcome back to “The Greatest Show in Finance!”™

As always, I’m your ringmaster, Mr. Great Stuff … and today is Friday Feedback.

If this is your first time joining the Great Stuff crowd, Friday Feedback is the day that we root through the Great Stuff inbox and answer your stock market and investing questions, indulge in your rants and generally run amok.

Now, around here, we call our regular readers Great Ones because, well, y’all are great just for being here.

But if you want the true “Great One Experience,” you simply must write in and join in on Friday Feedback. It’s a rite of passage, after all.

So, if you’re ready to be experienced, drop us a line at GreatStuffToday@BanyanHill.com. It doesn’t hurt … much.

After much hemmin’ and hawin’ on my part, I bought some AMD in late January this year. Some folks might say that my timing was bad because the share price has been unkind to me over that short period of time. But here is the story that Great Ones will want to hear about this seemingly sad affair.

The moral of the story: selling calls can soothe one’s pain if a stock purchase doesn’t go in one’s favor right out of the chute.

Maybe this little vignette can push the Musk man and HEVs off the page for a day. WHUT?!?

Best regards and keep up the good work, The Weeshump

Weesy? Is that you? We haven’t heard from you since June of last year, I think. 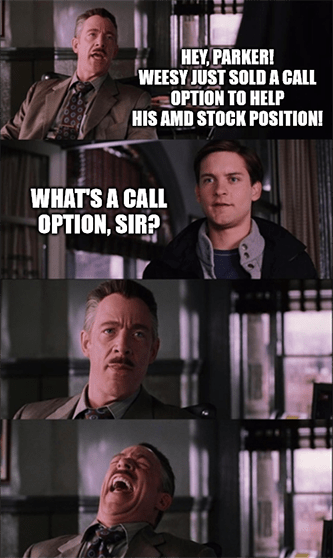 It’s hard to tell now that our tech department won’t allow me to keep every single email sent to the Great Stuff inbox ever. Packrats gonna pack, IT guys gonna IT … what ya gonna do?

Well, Weesy … can I call you Weesy? Or would you prefer Humpy? Oof … nah, you’re right. Weesy it is.

If your mission was to bump Musk and hydrogen off the Great Stuff page … mission accomplished! (For today, at least … tomorrow is a different story.)

And I love what you’re doing with your Advanced Micro Devices (Nasdaq: AMD) holdings!

Great Ones, what Weesy has here is what we call a covered call position, and it involves trading options. If you haven’t read Great Stuff’s Options 101 primer yet, ya might want to go ahead and do so … just sayin’.

Or, if you want more direct information on covered calls, click here.

So, the idea here is that you bought a stock that you really like — in this case, it’s semiconductor giant AMD. You did your due diligence in researching the business, its income and earnings statements, checked the charts and even set your investment return target.

Unfortunately, Mr. Market didn’t want to play along, and AMD stock dropped because … checks notes … tech is bad when interest rates rise. I don’t agree, but it is what it is.

Instead of crying over spilled semiconductors, Weesy here decided that since Mr. Market wasn’t going to cooperate, he’d make up the difference with options. Since Weesy has 300 shares of AMD stock, he can sell three AMD call options without any margin requirements at all.

By selling AMD call options, Weesy can basically get paid while waiting for AMD stock to rally. For instance, he sold his first AMD call option for $1.46, or $146 per contract. As long as AMD’s stock price doesn’t rise above the sold call option’s strike, Weesy gets to keep that money.

The best part? He can keep selling AMD calls like this every single month for as long as he wants, as long as AMD remains below the sold call option strike. And if AMD’s price moves above that strike, Weesy has to sell his AMD stock at the agreed-upon price … which is the strike price of the sold call option.

Since Weesy still has all 300 shares of AMD stock, it appears that his strategy is working nicely. Judging from AMD’s options history, it appears that Weesy is selling AMD call strikes at about 20% or so out of the money — i.e., the strikes of the AMD call options he’s selling are 20% above AMD stock’s current trading price.

This is a very, very smart move if you want to keep the stock you’re selling calls on. 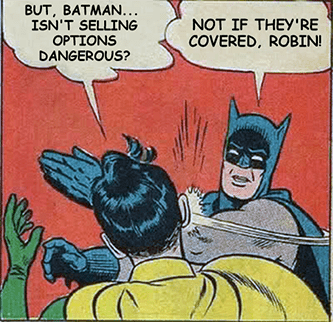 Now, selling calls 20% above AMD’s current price works for AMD … but it might not work for every stock out there. After all, AMD currently sports implied volatility of about 11%.

This means that the market believes that AMD could move up or down 11% prior to option expiration.

To be safe, Weesy added another 10% or so to his target so that he wouldn’t have to worry about losing his AMD stock. I mean, there’s always the possibility that AMD will rally above your sold call, no matter how unlikely, so be sure to keep that in mind.

Seems to me you’re making out like a bandit. This truly is Great Stuff. Thanks for writing in!

Want a simpler look at the options market? Look no further! It’s as easy as One…

Y’all remember Mike Carr, right? The creator of One Trade — not to mention the most impressive breakdown of the Super Bowl Indicator I’ve ever seen?

Well, Mike is prepared to make you a bold guarantee. If he can’t show you how to double an investment account in one year … he will work for a full year, free of charge.

See why Mike isn’t pulling any punches with his latest strategy.

See? I told you it wasn’t all just hydrogen power and Musk-related mischief ‘round these parts.

Anyway… On with the show!

Greetings from a funny, cloudy little island full of Lords and Rings n things hanging off the edge of the South Pacific.

You spoke of a monster constellation forming in deep space (well, actually on a stock exchange).

The constellation in view owns about 38% of a canopy company. Do you think this galactic event will keep Canopy Growth growing? Or will it fade away into a black hole?

Thanks for stopping by the ol’ cosmic canna-lounge.

Rhetorically speaking, I mean, unless you have some canna connections you’re not telling me about…

Constellation knows its way around the legal brew room … or at least, it can pull the right taps. (Phrasing?) But the bud room is a whole ‘nother story…

Now, I can’t speak for y’all pipeweed tokers out in Hobbiton, but here in the U.S.? Broadscale legalization is Canopy’s golden ticket — and Constellation’s too, by effect.

Once those green gates open up nationwide — like actually nationwide — Constellation’s investment in Canopy will create a drinkable cannabis market, the likes of which have never been seen before. Obviously…

So, if you were looking to invest in Constellation or Canopy, well, ask yourself: How soon do you believe the U.S. market will be fully legalized? (If … ever?) And how long do you have to keep holding out hope for pot stock profits?

If you don’t mind waiting, get your hacky sack out while CGC shares kick around for a while. It’s got Constellation’s booze budget as backup … it’s fine. Otherwise, investing in Constellation can get you on top of a fully brewed alcohol market that’s right here right now … and maybe some drinkable weedy greatness later on.

Now on to your question … did you have a question? Did we answer it already? It is Friday, right?

Does Anybody Read Real ^&*% Anymore?

Amazon bookstores in Malls in SD Ca. But they are never busy because they don’t have anything but books. That’s not what must people buy on Amazon 🤔

Oh, Valerie … the irony of this statement is killing me considering how Amazon (Nasdaq: AMZN) got its start in life.

You’re right, though. Most people just don’t buy books anymore because most people don’t read anymore … at least, not the kind of reading that you and I (presumably) grew up with.

It’s all digital digests and audiobook assortments now — assuming you can pry yourself away from the social media machine long enough to concentrate on anything that doesn’t give you blue light blindness.

I don’t have a social media problem … you have a problem!

Meanwhile, I’m just over here huffing that sweet, heady scent of decades-old paper … as any tried-and-true book lover is wont to do. (I’m not alone in this, right? Or am I the only one who enjoys the smell of a good book?)

Anyway, Amazon! It was always a matter of time before the one-time bookseller’s brick-and-mortar business boarded up its doors. The real question is: If a bookstore falls in the Amazon, does it even make a sound?

Thanks for being a real human bean, Valerie — erm, I mean a real Great One!

Over the next decade, this could usher in a $51 trillion energy revolution that could change EVERYTHING…

How you power your home, your gadgets, your workplace… It’ll all go from night to day — like flicking on a switch.

This 20,300% market surge is only the beginning … and you can buy in right away.

I would be curious to hear your thoughts on NWARF, HTZ and INTEQ.

Thanks for writing in, DW. You summed up my thoughts on space debris … succinctly. As for NWARF, HTZ and INTEQ? Umm.

Let’s see what we’ve got here: Over-the-counter budget airlines out of Norway … a satellite internet service provider … and Hertz (Nasdaq: HTZ), back from the dead. Let me put it this way, Great One: 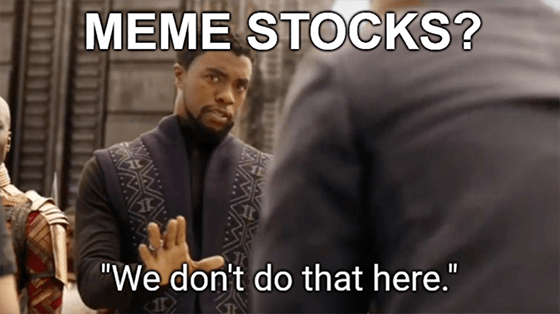 That said, I want to know why you’re interested in them. Seriously, why? Sell me on your picks, DW!

Better yet, where are you trading from? Are you a European investor looking for airborne stock advice? Or a U.S.-based trader looking for a reason to jump into random micro meme stocks?

Heck, I’ll open this up to the global Great Stuff audience out there. Let me know in the inbox where you’re reading from! I’m curious just how many of y’all are tuning into the show from overseas.

Everyone is overseas to everyone else, Great Stuff, duh.

Touché, and if you feel like sharing where you’re at in the great wide world, give us a shout and get the worldwide conversation going! I know there are some far-flung Great Ones out there (sometimes our courier pigeons come back extra winded).

Once you’re done yapping our virtual ear off in the inbox, catch up on all the Great Stuff you might’ve missed online at GreatStuffToday.com!