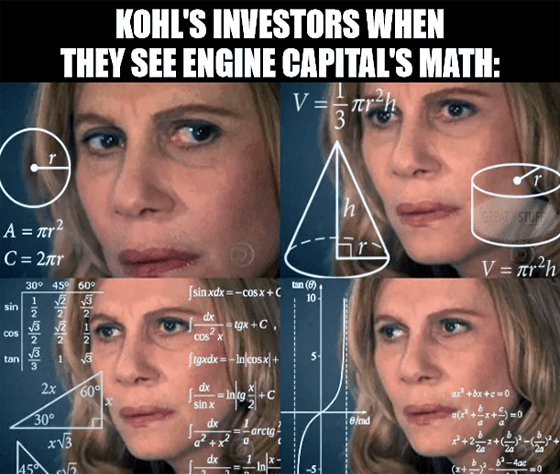 Only Parts Of The Kohl’s Will Be Removed…

I swear, Great Ones, Kohl’s (NYSE: KSS) must have a giant blinking target on its back. Activist investors are coming for the retailer … again.

You see, Engine Capital sent a letter to Kohl’s stating that it wasn’t happy with KSS stock’s lackluster growth … and it has a few ideas on how to improve that growth, at least for shareholders. Engine wants Kohl’s to either sell the entire company or spin off its e-commerce division.

Engine also said that it apparently knows some people — private-equity firms — that will pay $75 per share for Kohl’s. These potential buyers, as Engine Capital calls them, suggest they could monetize Kohl’s real estate holdings.

So, basically, Engine Capital is suggesting a slash-and-burn acquisition of Kohl’s. Sell the company, strip it for parts, and sell off everything that’s worth anything — online sales platform, real estate, you name it.

If you wanna know what would be left over, just look at Bed Bath & Beyond (Nasdaq: BBBY). Such a success story. Much wow.

They owned 9.3% of KSS outstanding stock and wanted Kohl’s to install the former heads of Burlington Stores and Denny’s, among others, on its board.

Those names did not inspire confidence at all, and neither did the activist group’s touted “success” with Bed Bath & Beyond. Seriously, Burlington Stores, Denny’s and Bed Bath & Beyond … I can’t think of a more lackluster collection of credentials for anyone looking to improve upon a business.

The point is, Kohl’s told that dusty old group to take a hike back in March, and I expect Kohl’s to do the same with Engine Capital.

After all, Engine Capital sounds like it got its analysis from someone’s Cousin Vinny. I mean, $12.4 billion for the e-commerce unit of a company worth $7.7 billion? I want whatever Engine Capital is smoking during stock analysis meetings.

And why would Kohl’s say no? Because its turnaround plan is working. The company beat Wall Street’s earnings and revenue targets in each of the past four quarters. What’s more, Kohl’s last quarterly report was ridiculously positive. The retailer absolutely trounced Wall Street’s earnings targets and boosted its full-year earnings expectations into the stratosphere.

Whatever Kohl’s is doing … it’s working. And the only way Engine Capital can see to boost shareholder value above Kohl’s own efforts is to dissect the company and sell its bits off to Cousin Vinny up there.

In the end, I’m still not jazzed enough about Kohl’s to recommend KSS to Great Stuff Picks readers. But there aren’t too many retailers I would recommend right now.

If you were Jonesing for a retail investment that isn’t Amazon or GameStop (NYSE: GME) — for the lulz, right? — then Kohl’s is a solid bet, assuming the Engine Capitals of the world don’t screw things up.

If you’re going to jump on the Kohl’s bandwagon, don’t do it today. That nearly 9% rally is gonna fade as soon as Kohl’s rejects Engine Capital’s letter.

In fact, Google, Amazon, Apple and even the U.S. Army are investing in it too. 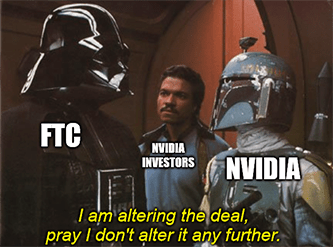 We are down from a triple-digit gain on NVDA stock to about a 78% gain.

Right now, NVDA stock is bouncing around support near $280 to $290, but I don’t expect this area to hold for long … especially if the ARM Holdings narrative continues to worsen.

As you probably already know, Nvidia is trying to buy U.K. chip designer ARM Holdings for $40 billion. The acquisition would give Nvidia a massive boost in the mobile semiconductor market, where ARM is the unofficial king of chips.

The deal hit the rocks almost immediately after it was announced, with U.K. regulators balking at the buyout and even going as far as to investigate whether the acquisition would be a national security issue. China is also reportedly hesitant to back Nvidia’s ARM buyout.

But last week, the deal took yet another turn for the worse when the FTC announced it was suing to block the $40 billion acquisition. According to the FTC, Nvidia’s ARM deal would “give one of the largest chip companies control over the computing technology and designs that rival firms rely on to develop their own competing chips.”

Now, I like Nvidia with or without ARM. The company is a market leader in graphics chips, AI, data center processors … basically anything with high-end semiconductors. Cast in that light, I can see why regulators are nervous about the ARM acquisition.

ARM or no ARM, I still like Nvidia’s prospects and I would still be an NVDA investor. However, this ARM situation has already hit our returns in NVDA stock, and it’s likely to continue to take a toll for the time being.

If you want to take profits now, I’ll completely understand.

Great Stuff Picks, however, will not be issuing a sell alert on NVDA stock unless the shares breach $270 — which is currently home to the stock’s rising 50-day moving average. That’s my line in the sand.

So, keep your eyes peeled for a potential Great Stuff sell notice on NVDA stock … or go ahead and sell it now if you’re nervous and want to take profits. 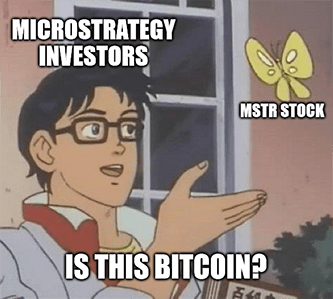 End of passion play, crumbling away, Bitcoin is the source of MicroStrategy’s (Nasdaq: MSTR) self-destruction.

I mean, the company owns so much bitcoin, it’s basically a poor-man’s bitcoin investment by this point. The company is as much a “business intelligence” company these days as I am a seahorse. (Which is to say … not really).

If bitcoin were to plunge after stock trading ceases on Friday, you can almost guarantee that there’s a nasty migraine in the making for MSTR investors come Monday morn.

So, you can imagine my total lack of surprise when bitcoin crashed as much as 18% over the weekend … and when MSTR started the week down 8.5%. There was no other news, no company reports, no analyst attention … nada. MSTR is down because bitcoin was down. That’s it.

See, I’m still befuddled by why anyone would buy MicroStrategy. Buying MSTR isn’t hedging you against anything. It’s not protecting you from the wild gyrations of the crypto market (obviously). And it’s not like you’re getting any real meaty business growth from the rest of MicroStrategy’s offerings.

Why invest in bitcoin by proxy? If you’re into crypto … just buy crypto. There’s no reason to overcomplicate things here. MicroStrategy will be pulled by bitcoin’s puppet strings for as long as it goes hard in the crypto paint.

By the way, if you are looking into crypto, check this out: For everything you need to know to enter the cryptoverse, click right here!

Gone: The Less You Know … The Better? 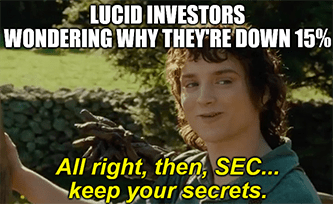 Today, electric vehicle (EV) maker Lucid was subpoenaed by the SEC, requesting certain documents related to an SEC investigation. An investigation into what exactly … well, Lucid investors are still speculating.

No, the SEC won’t let Lucid be or give investors lucidity, so let me see… All we know right now is that the investigation relates to the SPAC merger with Churchill Capital Corp IV that brought Lucid public — especially “certain projections and statements” the company made surrounding the deal.

According to the filing, “the Company is cooperating fully with the SEC in its review”… because what else would Lucid do? Fight back against regulators? Give investors even more reason to question what the investigation is about?

Lucid joins the rest of the EV startup stable in the SEC spotlight — seriously, what EV maker hasn’t been incessantly probed by regulators this past year? (Ouch … phrasing?) LCID shares cratered 15% on the news but regained some ground by midday.

We are deep, deep into my favorite part of the year, Great Ones — earnings season, of course!

Seeing as earnings season is the holiday that just keeps … on … giving … we’ve got an extra-large helping of earnings reports comin’ right up for you. Check out who’s entering the earnings confessional this week, courtesy of Earnings Whispers on Twitter: 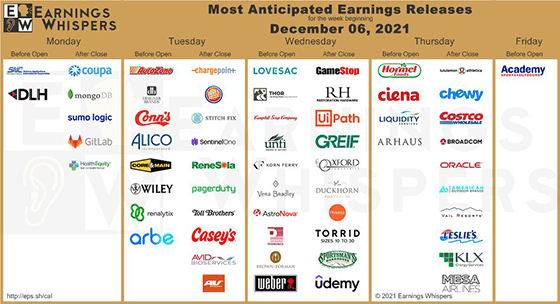 Sure, there’s the obligatory handful of tech: Pagerduty (NYSE: PD), Oracle (NYSE: ORCL) and Broadcom (Nasdaq: AVGO). But in a surprising twist of fate, retail earnings might offer the most allure this week.

Just take for GameStop, for instance. Will earnings show a washed-up, dying mall stalwart (like everyone knows GameStop to be) … or an e-commerce titan in the making like GME’s Chairman Ryan Cohen claims?

I don’t expect anything outstanding from GameStop’s report itself. How investors/hodlers/gamblers react to said report, however, is anyone’s guess.

Come Thursday, we’ll hear earnings from Costco (Nasdaq: COST), aka the Prepper and Stockpiler Embassy. Memberships have grown to all-time highs for the likes of Costco, Sam’s Club and BJ’s, what with everyone trying to stretch a dollar for all it’s worth.

Cost-cutting is Costco’s bread and butter — when the buying gets tough, the tough start bulk buying.

Then there’s Chewy (NYSE: CHWY), everyone’s favorite online pet store … due in no small part, I’m sure, to how Chewy dishes out “Oops, we goofed!” refunds like samples at Costco. Chewy desperately needs this earnings report to go off without a hitch, but already, analysts’ downgrades and doubts are a-flowing like a ripped bag of kibble.

Practically half market (yes, and you goons over at WallStreetBets) expects Chewy to fall off the face of the Earth post-earnings … which would indeed be par for the course for CHWY this year. Even when Chewy reports bang-up earnings … just a mere mention of supply chain holdups and it’s look out below.

Like Chewy, AutoZone (NYSE: AZO) shot up during quarantines … for vastly different reasons, obviously.  But now, AutoZone’s auto hobbyist and DIY dreams are still butting up against the ceiling of supply chain crunches, which are bound to stall AutoZone’s pandemic-propelled rally before long.

By contrast, RV-maker Thor Industries (NYSE: THO) has been working all pandemic long to bulk up its supply chain, simply by buying out its main longtime parts maker, Airxcel. Look at me … I’m the RV parts captain now. How this prep work will show in Thor’s earnings remains to be seen.

And finally, if you’ve been reading your Great Stuff on the regular, you’ll have surely noticed the king of electric-vehicle-charging: ChargePoint (NYSE: CHPT).

Last we checked in on ChargePoint, the company was still itching for a slice of Biden’s infrastructure pie (perish the thought). But I’m tuning in to the report for more deets on ChargePoint’s revenue-driving “charging as a service” business.

And that’s all, Great Ones! What earnings reports are you watching this week? Do you have a stake in MicroStrategy … or bitcoin? And what’s the deal with Kohl’s constant battle with activist investors?

Let me know your thoughts at GreatStuffToday@BanyanHill.com. In the meantime, here’s where you can find our other junk — erm, I mean where you can check out some more Greatness: