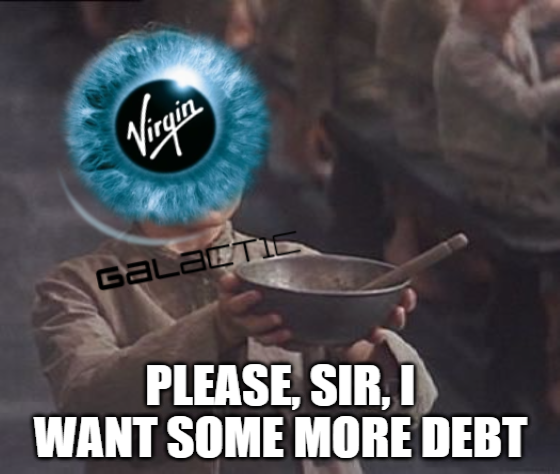 Neither A Borrower Nor A Branson Be

Here’s the story … of a lovely space stock!

That was bringing up some very lovely satellites. All of them had funding problems … just like their mother … the youngest one in curls.

And that, Great Ones, is how they became the Branson bunch … or something like that: hype events and debt. A whole lotta new debt.

First up, the positive news … which, given that we’re talking about Virgin here, “positive” is used very loosely.

While Virgin Galactic (NYSE: SPCE) is busy sending billionaires into the Great Beyond, the Branson bunch’s newest member, Virgin Orbit (Nasdaq: VORB), is more focused on sending up satellites.

In fact, VORB stock soared a whole 2% today ahead of a planned satellite launch. And, by the time you read this, a salvo of seven satellites might already be on their way into orbit.

To get more satellites into the ether, COO Tony Gingiss is working to speed up Virgin Orbit’s launch preparations … but this isn’t “reflected in the tempo of launches themselves.” Because of course it isn’t.

Whether or not Virgin’s characteristic delays will affect today’s hotly watched launch remains to be seen. If it’s a go, Virgin Orbit would officially have a launch under its belt as a public company, which is big bragging rights in the Branson bunch world.

It would also prove Virgin’s 747-based launch platform is feasible for routine satellite launches — which is an even bigger deal.

However, much of this hype is already baked into VORB shares — the stock rallied 20% last week when Branson teased the launch by bringing a rocket to Time Square. Apparently, Branson finds that easier than actually getting rockets up in the air … or keeping his spacefaring odysseys solvent.

Virgin Orbit’s SPAC launch was a disaster, with the company barely limping into the public markets after Branson himself provided additional funding.

And speaking of funding, Virgin Galactic announced today that it needs a fresh cash injection — about $500 million worth in convertible senior notes. Somehow this shocked the Street, which sent SPCE shares down 17% today … even though we’ve seen Virgin sell off for the same exact shenanigans many times before.

Seriously, SPCE is starting to feel more like The Money Pit than The Brady Bunch, but I digress…

SPCE investors, unfortunately, shouldn’t be surprised to see the stock fall flat on its face after yet another funding round.

We all know Virgin doesn’t plan to resume spaceflights until later this year, at the earliest. And it’s not like the company is making any money in the meantime — even when Virgin Galactic does start commercial flights again, all those trips are already booked and paid for.

Virgin Galactic needs cash to literally survive. And given the company’s track record of delays, debt and more delays … this might not be the last time Virgin Galactic tries to have the Street fund its thumb-twiddling existence.

In the tale of the two Virgins … this might just be the worst of times. I’m still waiting on these “best of times” to show up. Maybe next year, Virgin…

Editor’s Note: Why Are Some People Laughing At Paul ?

Because he just made the most outrageous stock recommendation of his career.

You be the judge. See the evidence here.

Won’t You Be My Neighbor? 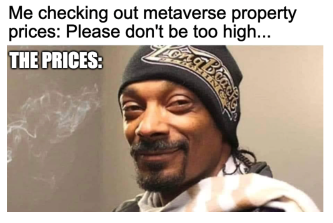 Forget the coastline of California and New York’s sweeping skyscrapers — the only real estate that matters these days is the metaverse’s digital digs!

Wanna buy a private virtual island off the coast of … well, anywhere? That’ll run you about $300,000 of real-world money. Or, if rest and relaxation aren’t your thing, you can party it up with Snoop Dogg over at The Sandbox … for the low, low price of $450,000.

If any of this sounds absolutely absurd to you … I promise, you aren’t the only one. But as Miami-based real estate broker Oren Alexander explains, the metaverse for some people is realer than the real world: “It’s not about what you and I believe in. It’s about what the future does.”

Thing is, the way the metaverse is trending, the future looks very expensive indeed. In fact, soon the only difference between metaverse property prices and, say, Los Angeles County real estate will be the fact that the metaverse is limitless … and California isn’t.

I miss the days when I just had to worry about getting priced out of the real world.

Here’s something that could help with that: The metaverse may still be ethereal to most people, but the tech behind it isn’t.

In fact, an estimated 916 of the Fortune 1000 companies are already piling into this ground-floor technology that helps the metaverse operate.

A Matter Of Antitrust

Don’t touch that digital dial, Great Ones … we aren’t quite ready to leave the metaverse’s matters behind us just yet. This time, we’re talking about the mother of all things meta — even down to its newly minted name: Meta Platforms (Nasdaq: FB).

Now, you may or may not have heard that the company formerly known as Facebook is facing an antitrust lawsuit from the Federal Trade Commission (FTC) for the second time around.

In short, the FTC — yeah, you know me! — wants to level the social media platform’s playing field by forcing Meta to sell two of its most popular apps: Instagram and WhatsApp. This would keep Facebook — sorry, Meta — from being able to block competing apps on those two platforms, which is a big anti-competitive conduct no-no.

The first time the FTC sued Meta, a federal judge ended up throwing the case out with the baby and the bathwater. But this time around, the FTC has been “far more robust and detailed” in presenting its case that Meta is an alleged monopoly.

We’re confident that evidence will reveal the fundamental weakness of the claims. Our investments in Instagram and WhatsApp transformed them into what they are today. They have been good for competition and good for the people and businesses that choose to use our products.

Personally, I have no doubt that Meta’s meddling transformed Instagram and WhatsApp into what they are today … two mammoth social media platforms prone to crushing third-party competitors and leaving their users landlocked in Meta’s ecosystem. Just sayin.

TSM Chips Away At Its Goal

Here’s a quick snapshot of what the chipmaker reported:

For the record, those are ridiculously good numbers … but they weren’t even Wall Street’s main focal point today. Instead, all anyone can talk about is Taiwan Semiconductor’s capital expenditure budget, which reached an all-time high of $40 billion to $44 billion.

Not only does this top last year’s budget of $30 billion … but Taiwan Semiconductor basically flipped the bird at Intel (Nasdaq: INTC), which is spending a measly $20 billion to amp its chip manufacturing prowess.

Soaring chip demand from the world’s leading semiconductor companies — including Apple, Advanced Micro Devices, Nvidia and even Intel itself — have helped to tip the scales in Taiwan Semiconductor’s favor. It also gave the chipmaker confidence to raise its annual production capacity, which will result in more sales.

Its new production capacity, coupled with the fact that Taiwan Semiconductor is raising prices amid an ongoing global semiconductor shortage, should set the chipmaker up for a record-breaking year … and makes TSM stock all the more intriguing as a possible Great Stuff Pick.

But what are your thoughts, Great Ones? Did Taiwan Semiconductor’s earnings make you hungry for more chip stocks? Let me know at GreatStuffToday@BanyanHill.com.

All it took was the same special kind of trade — opening it every week on Monday and closing it on Wednesday. And Adam O’Dell beat the market by 51 times.

Adam would like to roll out the red carpet and invite you to join today. But act fast: This offer is only available until tonight at midnight Eastern time.

You must watch this right now. 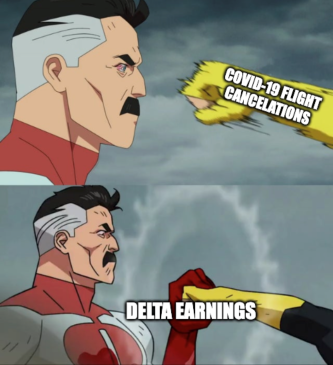 Taiwan Semiconductor isn’t the only stock jumping higher on that ever-elusive analyst attention. No siree! Today’s other Street-beating stock is none other than high-flying Delta Air Lines (NYSE: DAL).

Everyone and their mother waited with bated breath as Delta announced earnings today, seeing as its sales figures foreshadow how the recent rise in COVID-19 cases could further impact the airline industry.

Delta defied gravity today, reporting adjusted earnings of $0.22 per share versus the $0.14 per share that analysts expected. Furthermore, Delta posted sales of $9.47 billion in its latest quarter, which is the company’s highest revenue figure since way back in 2019.

But Delta isn’t delusional about the challenges it and other airlines face thanks to the cursed coronavirus:

The recent rise in COVID cases associated with the Omicron variant is expected to impact the pace of demand recovery early in the quarter, with recovery momentum resuming from President’s Day weekend forward.

Of course, all Wall Street heard was that investors would need to weather out the winter before seeing bluer skies ahead. That’s all the encouragement they needed to load up on DAL stock and send it soaring 3%.

From Delta’s dominating earnings to Virgin Galactic’s sell-off-a-thon … what’s on your mind this week, Great Ones? Drop us a line and you just might beat the buzzer for tomorrow’s edition of Reader Feedback.

Write to us whenever the market muse calls you! GreatStuffToday@BanyanHill.com is where you can reach us best.