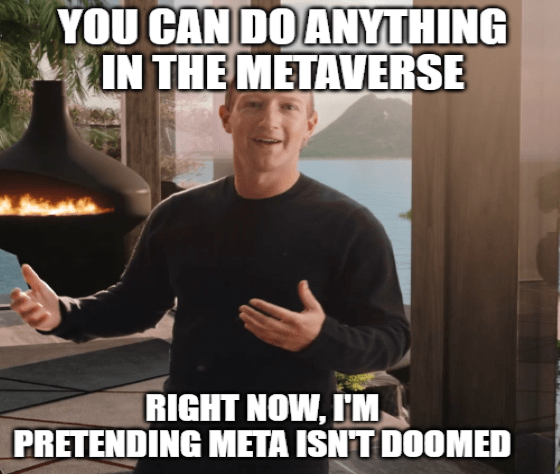 Mark had them metaverse memes (memes).

The whole metaverse was lookin’ at ‘er.

I have no idea what I’m reading anymore.

As for the low expectations? The world just caught a glimpse of the $1,500 Meta Quest Pro headset, thanks to Meta CEO and everyone’s favorite human impersonator, Mark Zuckerberg.

Is it? Is it though? Because Mr. Mark’s starting to let his whole overly enthusiastic tech bro façade slip a bit. If you haven’t heard about the Meta Quest Pro until now, well, it’s probably because Zuckerberg barely hyped up the product. At all.

If anything, he seemed rather unimpressed by the whole thing.

Zuckerberg said that VR is entering the “trough of disillusionment,” which in CEO-speak basically means: “We’re launching this unwanted and barely usable product into an uninterested market. I hope you’re ready.”

Way to set your expectations low ahead of the product launch, guys. Is that why you’re calling this “mixed reality” … because plain old virtual reality ain’t cutting it these days.

The Meta Quest Pro goes on sale October 25 … even though the Meta CEO has previously discussed how the metaverse won’t be big until later this decade. And let’s be honest, thinking that the smartphone age will fully transition into the metaverse age by the end of the decade is wishful thinking at best.

So … why in the world are you selling the headsets now? Just to satisfy a few techies who get off on being the first adopter of any new tech? Or to get a rare, fleeting glimpse of analyst attention?

As for the latter, it already brought one tech-fawning analyst out of the woodwork:

Our job is to make stock calls. We admire Mark Zuckerberg’s commitment to a vision in the face of overwhelming odds. Meta is willing to make big bets that may change the world for 2 billion consumers, or create an epic fail. — Needham analysts 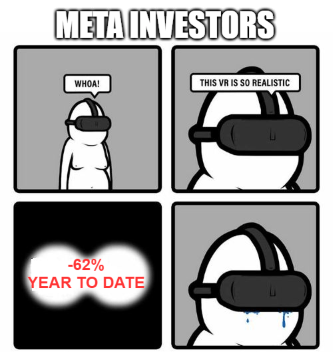 Sure, sounds like a brilliant plan to turn around the ailing social media business that Facebook — er, Meta, created.

Let’s not forget that Facebook and Instagram, Meta’s current cash cows, are seeing competition rising on every front. Why else is Instagram trying to be TikTok? Because being Instagram isn’t as profitable as it used to be. It’s not as much of an attention suck as it used to be.

As much as Mark Zuckerberg doesn’t want to admit it, his company is following innovation more than creating it. Meta’s groundbreaking days are behind it … if you can call the site’s original “are your friends hot or not?” format groundbreaking to begin with.

I mean, do you want the metaverse? I don’t … at least not as the Zuck or Walmart or Roblox have envisioned it. You can’t just develop metaverse goggles and hope that the metaverse builds up around it. That’s not how any of this works.

Well, I guess you can do that. But it doesn’t mean anyone will buy your goggles, Zuckerberg.

And Now, A Word From Our Sponsors…

Mike Carr teaches options trading on Wall Street. Wall Street types — and other aspiring traders around the world — fly to him to learn how to trade the way he does.

Why do people fly from all over the world just to learn from Mike?

Because Mike isn’t your average options instructor — he’s one of the best options traders in the world.

It normally costs thousands of dollars to learn from Mike.

Not anymore. You can sign up for Mike’s Options Master Class online for a small fraction of the cost of his in-person class … the one that’s ignited successful trading paths for countless investors.

The Good: Now For Innovations That Actually Matter… 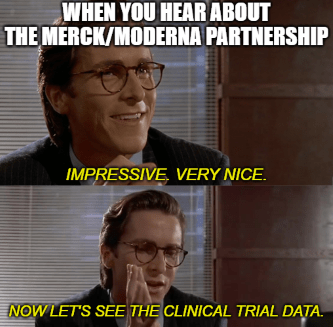 And no, that’s not sarcasm. While the Zuck is off dreaming of Metaverse bucks, Merck (NYSE: MRK) and Moderna (Nasdaq: MRNA) are out here literally making personalized cancer vaccines.

Ugh, what does that sink want now?

Hmm, yes, I know some of these words.

When you combine personalized, individualized, precise mRNA tech with Merck’s skin cancer drug, Keytruda … you have a potential lifesaver for melanoma patients and a gold mine for biotech investors. That is, if Moderna/Merck’s clinical trials for the combo are successful … and those are still in Phase 2.

Don’t worry, all y’all biotech investors: You can bet I’m gonna keep an eye on this potentially potent pairing to see how clinical testing goes. Until then, check this out: 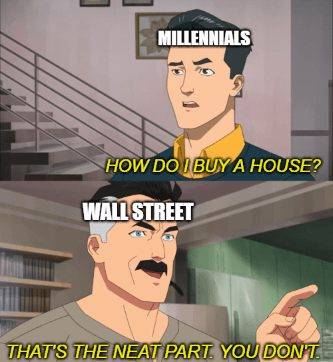 Home prices are dropping? You know what that means…

Lol, no. That’s not what this means at all.

Remember that talk we had a while back about the new age of financial feudalism? How whole neighborhoods are being bought wholesale — and in cash — by well-funded institutional investors like BlackRock? Well, let’s just say none of that’s stopping anytime soon.

This time, there’s just too much dang product. Too many houses … or so the dropping homebuilder confidence would have you believe. But one homebuilder’s pessimism is another investor’s optimism, right? Or something along those lines…

As we said, like, a few paragraphs ago, homebuilders are dropping prices to try and lure buyers — with 24% of builders reporting reduced prices, up from 19% the month before. This shouldn’t surprise you, considering Great Stuff mentioned just a few weeks ago that “a correction in housing prices was unavoidable.”

Yet who are those homebuyers, exactly? I mean, anyone who needs financing on their mortgage is increasingly at a disadvantage compared to anyone who can pay the entire thing in cash … discounted or otherwise.

Why, ‘tis Wall Street that’s buying these houses. Same as it ever was. I’ll let Kinloch Partners Co-Founder and CEO and President Bruce McNeilage explain:

What we’re seeing is builders have to make their quota. They have to make the end-of-the-year numbers. So they’re reaching out to folks like us, the institutional owners of houses, and we’re buying in bulk using those as rental homes.

People are just not walking in and the traffic has stopped in looking at models and looking at houses in suburbs and the subdivisions.

McNeilage also noted that homebuilders are giving institutional investors like himself 10% to 20% off of retail pricing if they go the Costco route and buy in bulk. Cheaper by the dozen? Try cheaper by the hundred…

Now, here’s the rub: Back in June, we talked about how profit margins for house-flipping had dropped down to their lowest point since 2009. And everybody went: “Oh boy! Wall Street’s going to stop buying up houses. I might have a shot. The bubble is bursting!”

Yet by McNeilage’s comments, it’s clear that house-flipping ain’t the name of the game anymore. It’s renting. It’s always been renting.

Institutional investors aren’t going to keep flipping houses, as house prices — and the profit in flipping them — continue to fall. But you bet they’ll keep on buying houses. Just … now the timeline’s a bit longer. Now the institutional goal is the classic M.O. of milking tenants dry for as many years as possible, making back loads of cash more than they would by house-flipping.

The Ugly: You’ve Got A Friend In Me 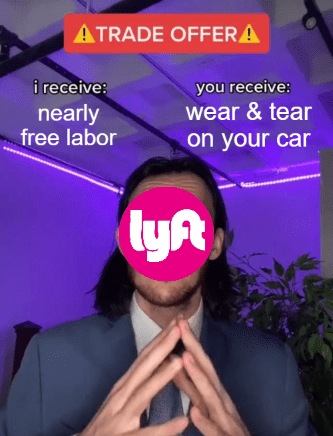 When the road looks rough ahead, and you’re miles and miles from … umm … actually making money for your investors … you just remember what your ol’ pal Gordon Haskett said.

Lyft (Nasdaq: LYFT) just nabbed itself an upgrade from Gordon Haskett Analyst Robert Mollins, who raised his rating on the ride-sharing company from “hold” to “buy.” The reason? “Overly negative” sentiment.

Gee … what could possibly be that “overly negative” sentiment surrounding Lyft? What could Mollins possibly be talking about here? I bet it has something to do with that whole “reclassifying gig workers as actual employees” business from yesterday.

The Labor Department plans to revisit the rules surrounding gig workers, meaning Lyft and Uber (NYSE: UBER) might have to actually classify their workers as … get this … employees! With actual benefits!

Yeah. There’s a reason why LYFT stock just hit record lows yesterday — but hey, this is Wall Street, where the ratings are all made up and contrarians are gonna be contrarians, just for contrarians’ sake.

Let’s upgrade LYFT! Why the heck not? Let’s forget all about the fact that Lyft and Uber only exist because of cheap labor without benefits. (And even then, it’s not like they’re actually … you know … profitable businesses.)

After their double-digit plunges in yesterday’s trading, UBER and LYFT ended today up 4% and 6%, respectively — even dead cats bounce, after all. And I still can’t get it out of my head that, amid all this, Mollins’ analytical argument boils down to “well, it can’t get much worse, eh?”

That’s the secret, Great Ones. It can always get worse.

Seriously, if you’re going to upgrade a stock simply because “we think any news (barring something terrible) would be welcomed” … you’re gonna have a bad time. Especially when that “terrible news” includes the possibility of the Labor Department piledriving ride-sharing profit margins into oblivion.

What do you think, Great Ones? Will anything actually come about from the proposals to revisit worker classifications? Do you think Uber/Lyft drivers should be treated as employees or mere contract workers?

Oh … and what’s the deal with that whole metaverse thing? Would you drop $1,500 on goggles that’ll let you see the metaverse … whenever the metaverse is ready to be seen?

So many questions. So little time. So many reasons to head on over to the Great Stuff inbox and share your side of the conversation. GreatStuffToday@BanyanHill.com is where you can reach us best.