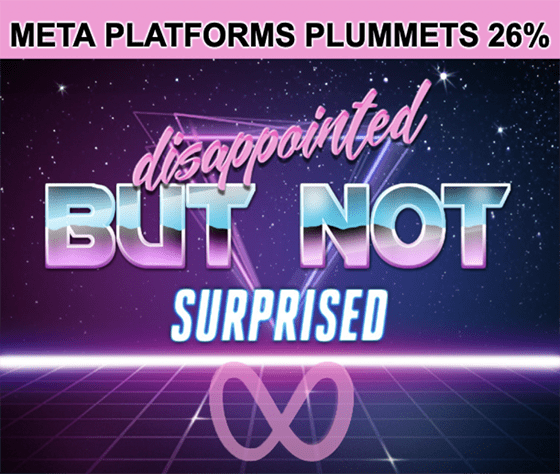 Did y’all just feel that?

A great disturbance in the social media Force — as if millions of Facebook investors cried out in terror and were suddenly silenced.

I feel that something terrible has happened, Great Ones. To find out, we have to get meta … again.

Dude, if you bring up that fake real estate or virtual dating shenanigans one more time, I’m out…

No, no, we’re talking about Meta Platforms (Nasdaq: FB). You know, the firm formerly known as the Book of Faces?

See, FB stock imploded today after a particularly nasty incident in the earnings confessional. Meta’s report was so horrid — how bad was it?! — that FB stock promptly cratered 25%, erasing over $230 billion in market value. Just, poof! Gone.

Facebook fanboys and statistic nerds were aghast and quick to note that it’s the largest single-day drop for any U.S. stock — like, ever.

Oh no, let me press F on the world’s smallest keyboard…

Let’s see what’s shakin’ over on social media shakedown street, shall we?

Meta was quick to prattle off a laundry list of reasons for the shortfall, but it all boils down to one crucial issue with Facebook’s core business: Usership is down.

Or, if you prefer Facebook’s corporate-speak, the company’s facing challenging engagement dynamics, namely “increased competition for people’s time and a shift of engagement within our apps.”

Are … are you trying to tell me that people don’t want to be on Facebook all day, every day? Especially not after being locked inside for — checks notes — two years now?

People were ditching Facebook and Instagram for greener social media pastures before the pandemic. Zoomers wouldn’t be caught dead looking at Facebook — it’s TikTok or talking directly with people over Discord now.

For as much as Meta wants to deny it, Facebook fatigue isn’t just setting in. It’s been here.

People are going outside to touch grass again … or at least disconnect from social media at home. (Why not … both? Both is good.) After a certain point, even staring at a peeling beige wall is more appealing than the endless, boring scroll-a-thon.

So, you’re saying it’s time to break out the snarfblatz?

When is it not? Besides, what happens when fewer eyeballs are on Facebook’s platforms … and its ads? You guessed it: Lower guidance. And that’s where Wall Street really lost patience with Zuckerberg and company.

For the first quarter, Meta predicts revenue will land between $27 billion and $29 billion — far short of the $30.15 billion analysts expected. 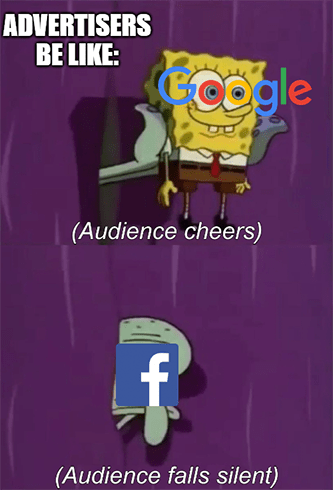 Ready to point fingers at any and every headwind, the Facebook parent blamed Apple’s iOS privacy changes for $10 billion of its expected shortfall. Even we don’t hate Apple that much…

But when your main moneymaker is selling oddly specific shirts and trinkets to people by using their personal data, privacy changes can cripple a poorly monetized social platform.

Combine that with “increased competition for people’s time,” and you have … well … the disastrous guidance that Meta reported.

But is the digital ad business as dead as Meta says it is? I mean, Alphabet (Nasdaq: GOOGL) just reported standup revenue yesterday — up 32% due to strong digital ad sales. YouTube and Google are monetizing their users fine, but apparently, that’s an enigma for Facebook.

Mike Carr is a retired Air Force lieutenant colonel who programmed nuclear codes for the Pentagon during the Cold War. Now he’s one of the top trading experts over at True Options Masters.

Mike created a strategy that revolves around one single trade using the same algorithms he used in the Air Force. With this method, Mike not only helps remove the stress of what and when to trade, but he has also shown his readers chances to get up to 100% gains and sometimes more in a matter of days!

All you need to do is follow his lead. To see how Mike does it, CLICK HERE while there’s still time — before the midnight Eastern time deadline!

From Bad To Biogen 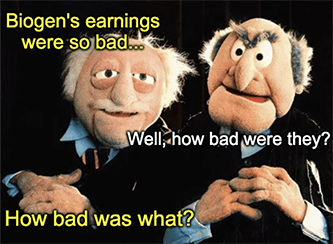 After all, we told you a few weeks back that Medicare’s decision to limit Biogen’s “Alzheimer’s” drug Aduhelm would “severely limit the number of people who can take Aduhelm by a lot … as if the drug’s $28,000 price tag hadn’t already done the trick.”

Now that I’ve read Biogen’s earnings statement, it looks like “a lot” might’ve been a bit of an understatement.

See, Biogen only managed to bring in $1 million in Aduhelm sales in the fourth quarter. That’s still better than the $300,000 it made from Aduhelm in Q3 … but far less than the multiple millions of dollars in revenue that Wall Street originally wanted.

When you run the math, it gets even grimmer: $1 million in Aduhelm sales is the equivalent of 36 people booking Biogen’s treatment. That doesn’t even scratch the surface of the roughly 5.8 million Americans suffering from Alzheimer’s disease here in the states.

For more on what’s happening in the biotech market today, click here! 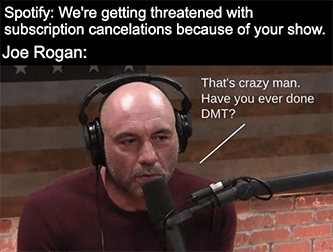 Spotify (NYSE: SPOT) stock is in trouble, Great Ones — and no, this time, it’s not because of Joe Rogan.

“Three million people still sounds like a lot of people,” you might say to yourself. And then you might ask: “If Spotify’s subscriber base is still growing, what’s the big deal?”

I’m so glad you asked. You see, without premium payers, Spotify will become increasingly more dependent on advertising revenue (ha, I just learned about this), meaning the future-focused tech titan could end up sounding more and more like those … what do you call them … radio stations?

Thing is, advertisers don’t like to be tangled up in controversy for fear of brand bashing, boycotting and the like. And now, thanks to The Joe Rogan Experience, SPOT investors are acutely afraid of advertisers pulling their products off Spotify’s platform.

Considering ads now make up some 15% of Spotify’s revenue these days, that could be bad news bears for SPOT stock should all the Rogan outrage continue.

At this point, Spotify must be asking itself: “Did we make a smart $100 million investment … or a $100 million mistake?” You tell me. 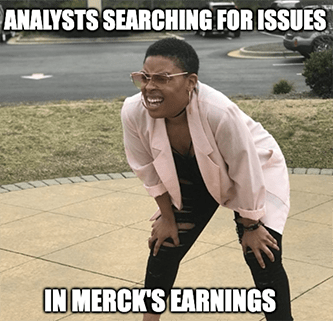 Does anyone else feel like medicine man Merck (NYSE: MRK) has the red-headed stepchild of COVID-19 treatments?

I mean, sure, clinical trials of its molnupiravir pill might’ve been shown to minimize the fatality rate from coronavirus infections by 90%, but when do we ever hear about this medicinal wunderkind outside of earnings season?

Earnings per share? They came in a full $0.27 higher than expected. Revenue? Try $13.52 billion on for size in its latest quarter — up from the $13.16 billion analysts anticipated.

And that medicine of the night, molnupiravir? Well, Merck’s on track to sell another $5 billion to $6 billion worth of the treatment this year, after already delivering 1.4 million courses of molnupiravir to the FDA in December.

In other words: Don’t mock the Merck, lest its earnings go berserk. 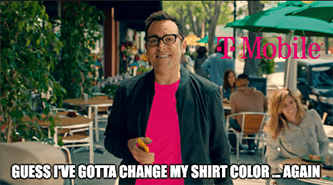 Time-tested T-Mobile (Nasdaq: TMUS) is up 10% today on strong earnings and even stronger guidance.

The telecom company said revenue was up 5.5% to $20.8 billion last quarter, just slightly under Wall Street’s $21.1 billion estimate. EBITDA, however, was in line for the quarter, at $6.3 billion.

Overall, that’s not too shabby considering T-Mobile spent an arm and a leg ($26 billion, to be exact) to merge with sister mobile network operator Sprint early last year. While Sprint sunk T-Mobile’s per-share profit on a year-over-year basis, it should more than make up for those losses when the two wireless networks fully join forces.

Already, T-Mobile is calling for 5 million to 5.5 million new postpaid subscribers in 2022, which is in line with subscriber growth in 2021. However, T-Mobile is typically conservative with these estimates and has blown past its own forecasts for eight years running.

So long as those Sprint customers continue to stick around, it should be smooth sailing for TMUS stockholders … “should” being the operative term.

Great Ones, here’s a pop quiz: Which of the following “new tech” is expected to grow a whopping 63,000% this decade?

Watch this video presentation to get the answer.

In the meantime, write to us whenever the market muse calls to you! GreatStuffToday@BanyanHill.com is where you can reach us best.