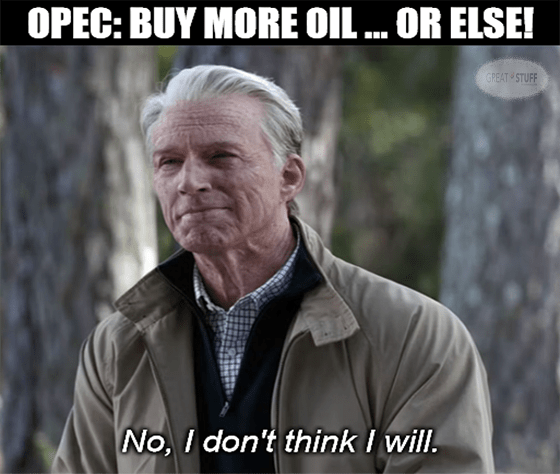 Great Ones, OPEC was born to be a roughneck. But as we’re all finding out this year, pullin’ case and layin’ pipe is hard labor. And oil prices, while volatile, will never amount to nothin’.

I mean, I could have gone the “Midnight Oil” route. But I think that’s a bit overdone.

The point is, if you’re still burning diesel … burning dinosaur bones … you’re gonna have a bad time. And it’s well past time you broke your rusty cage and ran.

What in the world are you talking about?

Sorry, I was having fun on this second Monday of the week.

I’m talking about what went down in the oil patch this Labor Day weekend. The Organization of the Petroleum Exporting Countries (OPEC) agreed to cut crude oil production.

Due to falling demand and plunging prices, the cartel agreed to slow oil production by 100,000 barrels per day in October. Surprisingly, Russia agreed to go along with the production cut after lobbying against it last week … for obvious reasons.

Russia may not be an official OPEC member, but it is part of the so-called OPEC+ group — which, unfortunately, is nothing like Disney+ or Paramount+. I think OPEC is missing a branding opportunity here.

Anywho, you might have noticed that oil prices have plunged for three straight months this year as concerns about global economic growth mount. Stateside, this is even more concerning, as the U.S. is pretty much officially in an economic recession.

There are a couple of reasons for this unusual reversal in oil prices.

According to Interactive Investor’s Head of Investment Victoria Scholar: “The cut was only modest and therefore mostly a form of verbal intervention, sending a signal to the West about OPEC’s ability to influence the market.”

Basically, this was OPEC saying: “Hey! Remember us? Yeah, we can do this all day, so start buying oil again!” 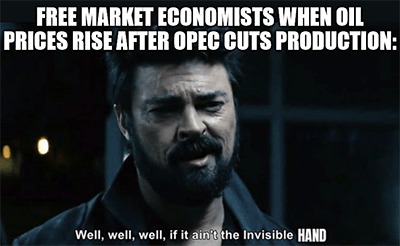 Unfortunately for OPEC and anyone investing in the oil market, they’re all working on borrowed time. Furthermore, both are looking at a global economic recession.

Here’s how this is gonna play out: The growing recession, driven by the Federal Reserve’s interest rate hikes, is going to further weaken demand for oil.

It won’t matter if the Fed’s actions slow inflation. The damage to the U.S. consumer is already done on that front, and the recession will compound oil demand issues.

Then, by the time inflationary pressures are tamed and the economy is in recovery, electric vehicles (EVs) and other alternative-energy options will be even more entrenched in the market.

I’m talking 2024 here — yes, that’s when I expect most of this economic insanity to finally abate.

And then, in 2025, many European countries and California will have bans on combustion engines, causing even more trouble for the oil market. We’re basically looking at a death by a thousand cuts for the oil industry.

Well, maybe “death” is too harsh a word. The world will still need oil for lots of situations and applications. It won’t die completely, but OPEC will eventually become a shadow of its former self. And that’s a good thing.

Imagine your investments not being subject to the profit whims of a global resource cartel! Just imagine…

Imagine there’s no oil. It’s easy if you try…

I’m not saying there are no good investment opportunities in the oil market. But there will be heavy consolidation in the next few years as companies look to shore up their bottom lines in the midst of declining demand.

Now, you can either research yourself silly looking for these lingering oil investment opportunities, or you can start investing in the alternatives that are going to take center stage in the new energy market.

According to Adam O’Dell, one tiny company could have the answer to the global energy crisis. This Silicon Valley firm has discovered how to use artificial intelligence to crack open the largest untapped energy source on the planet … making it available at scale for the entire globe.

This resource isn’t oil, gas, wind, solar, hydro, nuclear, fusion … or anything you’ve likely heard about before. It’s much bigger.

In fact, just one year of this untapped resource in the U.S. alone provides five times as much power as the largest oil field on Earth.

Which means this breakthrough is set to help launch an era of cheap, abundant electricity the likes of which the world has never seen.

Everything you need to know is right here. 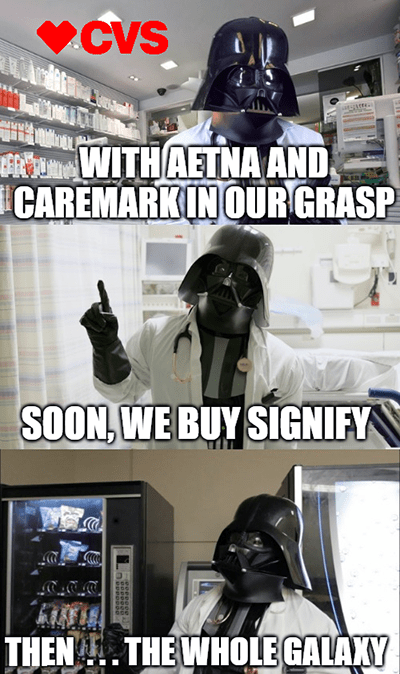 Great Ones, the not-so-long wait is over! For all y’all waiting to hear who would finally be the proud owner of Signify, the home health care company, the winner has emerged: It’s CVS (NYSE: CVS).

Oh. If you’re excited, then yay, I guess?

“Excited” is a bit of a grandiose term, but … never mind. For just $30.50 a share, CVS now has Signify’s analytics tech — and all the data that comes with it. Nice.

Signify’s home health care goodness will round out CVS’ stable of other health care-adjacent buyouts, such as Aetna insurance and the primary benefits manager Caremark.

Wait, so CVS went up bidding against Amazon and Walgreens … and won?

CVS won the battle for who owns Signify at least. As for the war over controlling the home health care sector? Well, that’ll be decided in time.

FedEx Around & Find Out 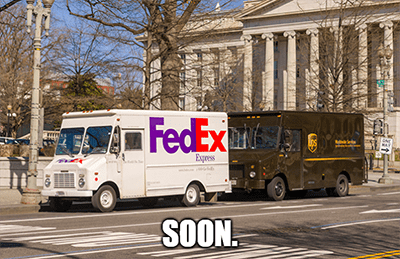 It’s more likely than you think. It’s … kinda what this whole rag was based on to begin with.

Citi Analyst Christian Wetherbee woke up wanting to stir the pot, and oh, the pot’s a-stirrin’. The analyst downgraded FedEx (NYSE: FDX) from buy to neutral, while also dropping his price target from $270 to $225. The reason? Weakening “Ground” volume. Simple enough.

But here’s where things get dicey: Wetherbee is so bearish on FedEx handling its lower volume that he recommends overweighting rival United Parcel Service (NYSE: UPS). The absolute gall!

Still, Wetherbee isn’t wrong about FedEx … but trading one shipping company for another will get you burned.

UPS might not be as bad off as FedEx, but both are going down due to “macro weakness” … which is just analyst code for “recession.” And we want to be negative without being too negative here, you feel me?

You Got A Fast Car… 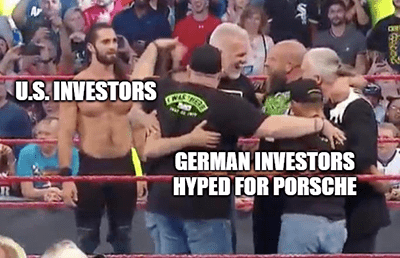 But do you have Germany’s soon-to-be biggest IPO? No. No, you don’t. (Unless you actually do own Porsche then … hit me up sometime?)

Anyway, Volkswagen is shunning all that “macro weakness” we all talked about, instead announcing intent to launch an IPO for its Porsche brand.

Notice that we’re only talking about intent here, not actual plans, as Volkswagen’s reserving the right to pull the rug should macro weakness get even weaker.

Great One Bill in Nürnberg, you’ll have to be our international correspondent on this one — there’s no American ticker on this one. Sorry to bear the bad news. Of course, details on the deal are yet unfolding, things change, yada yada yada.

We may not get a shot at the Porsche listing stateside, but still: The IPO is expected to be valued between €60 billion and €80 billion — and that’s a pretty big deal indeed.

If y’all are really interested in the Porsche IPO, drop me a line at GreatStuffToday@BanyanHill.com, and I’ll find the answers you’re looking for.

This Could Be The Best Bear Market EV Play

Ian King’s favorite EV play is sitting on 800,000 pounds of the material that nearly every EV needs.

That’s right: Without this material, most EV companies would not be able to have any cars come out of the factory. When you see what this material is used for, it will make complete sense.

What’s more, this one company is the biggest supplier in the entire Western Hemisphere, setting this little-known company up for massive profit potential as EV sales continue to increase.

EV sales are expected to soar 1,400% over the next decade, and it’s a great time to get in early.

In This Kitchen, Tim Cooks It… 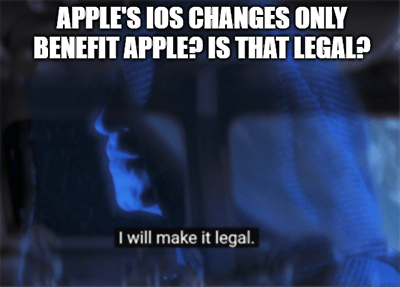 And now for a round of Great Ones’ favorite feature: the “well duh” segment of our broadcast, aka Stupid Stuff.

The headline, for your amusement: “Apple is gaining on Facebook and Google in online ads after iOS privacy change, report shows.”

Huh. So you mean to tell me … that Apple changing its iOS to better suit its own interests … is actually benefiting Apple more than Facebook or Google?

Wowzers, gee. This sure is a surprise — to freaking no one.

Seriously, Apple was pretty obvious in how its latest privacy changes would limit Google et. all’s ability to collect user data — and Google was sure vocal about how that’d kill its ad sales. And here we are now.

What do you think, Great Ones? Are you surprised by Apple’s “no duh” announcement? Have you switched to alternative fuels and stuck it to OPEC? If not, why not?

If you have thoughts on any of today’s topics — and I know you do — write to us at GreatStuffToday@BanyanHill.com.