Peloton’s Problematic Promise, Banks Be Busted & DiDi’s Do Or Die 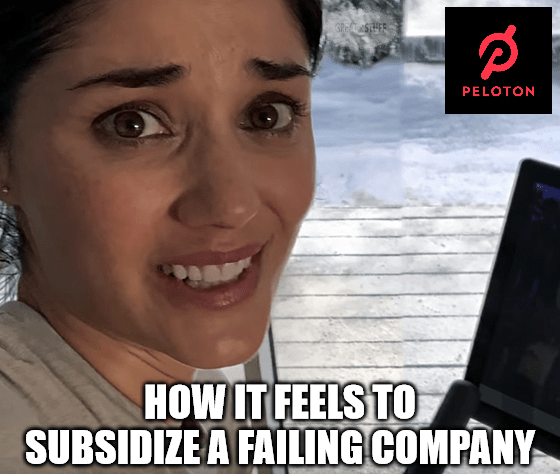 Punched, Right In The Peloton

Great Ones, the saga of Peloton’s (Nasdaq: PTON) fall from grace continued on Friday. And if you’re wondering why we skipped over it … well, Friday Feedback is important, you know?

Don’t tell me what to do!

So, the big news … is that Peloton is violating its once “sacred” and “sacrosanct” “golden goose” … i.e., Peloton’s raising the price of its monthly subscription.

Back in 2018, then CEO John Foley said: “Never say never, but I see it as our golden goose, and that $39 price point is sacrosanct to me.”

CEOs can say all they want, but we all know that nothing is “sacrosanct” when it comes to Wall Street … and Peloton just proved it by upping the price of its subscription plan to $44 per month.

The move is championed by new CEO Barry McCarthy — you know, the one that activist investor Blackwells Capital is pushing to sell the company?

Well … about that. Remember back in January when Peloton effectively “raised prices” on both its Bike and Tread products? I mean, it didn’t actually raise prices, but it did stop free delivery and added $250 to $300 to the price to make up the cost of shipping.

So, in the end, potential Peloton customers will pay about the same prices as they would have back in January. Not much of a price cut, if you ask me.

Basically, the total cost of an entry-level Peloton Bike will cost you $1,495 upfront and now $44 per month if you want all those fancy workout programs. And, let’s be honest, if you’re buying a Peloton and not using the subscription system, why did you buy a Peloton in the first place?

The only reason to buy a Peloton is the subscription services. After all, you could buy a much cheaper stationary bike/treadmill with similar options … sans the streaming service.

Then, if you wanted a streaming service later, just add one of those tablet mounts to your bike and get a cheaper workout service. Easy peasy.

But the real problem for Peloton here is that the price hike on subscription services doesn’t really affect potential customers. Either they want the service at that price (plus $1,495 for the bike) or they don’t. Existing Peloton customers, however, are S.O.L.

In fact, existing Peloton customers will be the ones most affected by the price hike … essentially forcing them to make up for the company’s mistakes. And that’s exactly what this price hike is. 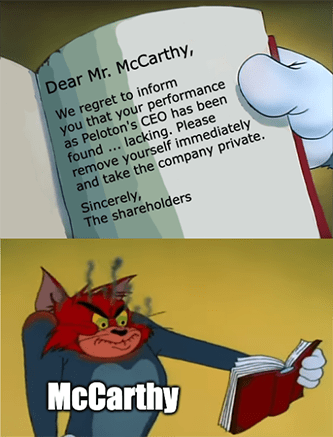 We all knew Peloton and CEO McCarthy had to do something. PTON stock is down roughly 40% since McCarthy took over, after all. The company is struggling to grow in a post-pandemic market and is losing sales to the great outdoors.

But I’m not sure hiking subscription prices will solve anything. The idea is that you lower your product cost and make up the difference on the back end with subscriptions. But if no one was buying Peloton Bikes at $1,495 back in January, why would they start now?

Furthermore, Peloton isn’t Netflix. It doesn’t have market saturation. Its customers can’t say: “Welp, where else are we gonna go?” Because they have literally tons of options.

Additionally, Peloton isn’t quite Apple yet either. It has a loyal customer base, true … but nowhere near Apple’s level of fandom.

In short, this price increase will likely hurt Peloton more than it will help in the long run. Y’all Great Ones already know how I feel about all this. Blackwells is right. Peloton needs to explore a sale ASAP … or even go private if it wants to remain independent.

If it focused solely on its niche and its high-end status, it would probably survive … but it’s not gonna do that while still being a public company — or at least an independent public company.

And now, a word from today’s sponsor:

Musk, Dalio & Cuban Are Loading Up On This One Coin

Billionaire hedge fund manager Ken Griffin said it’s “superior to bitcoin and will eventually replace it.” And Elon Musk made sure it was one of the only three coins he owns.

It’s called the Next Gen Coin…

And the financial elite say it could be 20X bigger than bitcoin.

Going: Don’t Bank On It

Pressure … pushing down on me. Pressing down on you. No one asked for. Under pressure that burns our big banks down, splits our stocks in two … puts traders on the streets.

Great Ones, you already know how this is gonna go if I’m breaking out Freddie Mercury on a Monday morning. So I’ll tell it to you straight: Bank stocks are beginning to feel the burden of rising interest rates, even though they’re traditionally beneficial for lenders.

Call it being more heavily invested in securities that will decline in value as rates rise. Call it fear over future Fed rate hikes that are making investors cautious.

Whatever you want to call it, cracks are beginning to show in the banking sector — and Bank of America (NYSE: BAC) is the latest volatility victim. Well, kinda…

The big bank released mixed results in its first quarter. While earnings and revenue both came in better than expected, net income reached just $7.1 billion — 12% lower than the first quarter of 2021.

Fortunately for BAC investors, Bank of America’s results were still better than many of its peers this quarter, making its lower income all but a moot point. BAC traded nearly 3% higher today following the company’s financial disclosure.

Going: Nektar Of The Pharma Gods 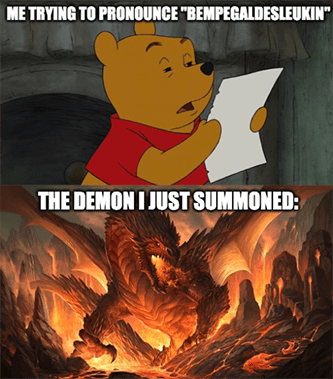 Considering the company is down a dismal 34% today, it might also be the only time we nag on Nektar…

Why the freefall from investing grace? Well, the drugmaker announced that it will halt all clinical drug trials for one of its key cancer treatments, bempegaldesleukin.

Thanks. I swear my cat didn’t walk across my keyboard while I was writing that one … it’s the actual treatment name.

Thing is, bempeg — shorthand for that gobbledygook up above — was the shining star of Nektar’s entire drug pipeline. And since this premier drug failed to help cancer patients in any of the company’s clinical trials, investors are now questioning the efficacy of other drugs in its arsenal.

As a stand-alone company, Nektar isn’t looking so hot following this latest failure.

But with several high-profile partners like Eli Lilly (NYSE: LLY) and Bristol-Myers Squibb (NYSE: BMY) on standby, Nektar has become a potential takeover target for a bigger — and arguably better — pharmaceutical buyout.

For that reason, NKTR might be worth keeping an eye on, especially after today’s haircut.

It has no transistors. No wires. And it needs no electricity. Yet this new silicon microchip is about to drive mankind into a new era. 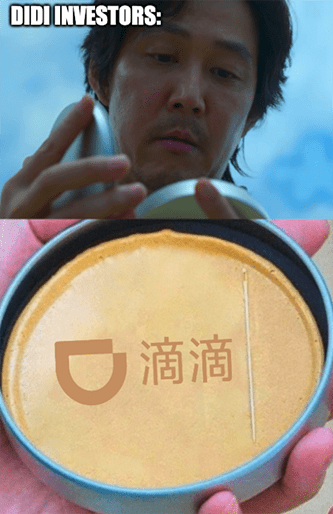 I’ll start with the lesser of the two evils … if that’s what you can even call a 12.7% dip in revenue and a $27 million net loss in Didi’s fourth quarter.

I’m pretty sure everyone saw these losses coming from a mile away … after all, this is what happens when the government removes your app off domestic app stores over “cybersecurity concerns” and makes it impossible for new users to access your services.

How are all these privacy probes working out for you, Xi? (Not great, Bob!)

Making matters even worse for DIDI investors — any of y’all still out there? — the company said it will hold a shareholder meeting on May 23 to discuss delisting Didi from the New York Stock Exchange.

While China’s securities regulator swears that Didi’s delisting decision was made of its own free will and had absolutely nothing to do with all the other U.S.-listed Chinese companies facing a similar fate … when given the choice between a quick or drawn-out death, is there really any choice at all?

Didi stock is down 10% today and will likely keep falling up until its May 23 board meeting. Your move, Xi.

Ahhh, now this is the greatest stuff. A whole fresh feast of earnings excellence, ripe and ready for the taking … or something like that.

Gather round with your fellow Great Ones, there’s enough for everyone to eat from this week’s slate of earnings reports. Well, unless Mitchell D., the eager-for-every-earnings-trade extraordinaire, joins us.

Lay your eyes upon this week’s earnings — courtesy of Earnings Whispers on Twitter — and tell me you don’t want to jump into a trading frenzy yourself: 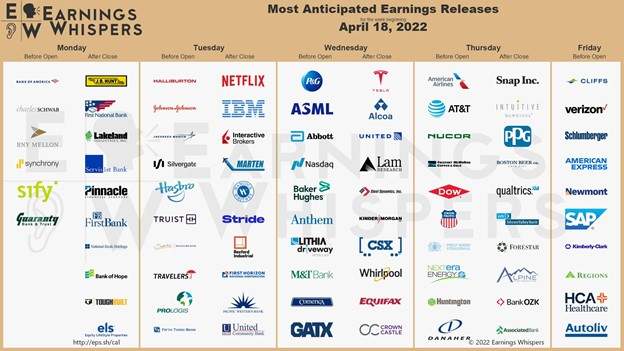 If we’re stuck talking about Elon news anyway, there should be some non-Twitter-related news this week at least.

‘Course, if you’re like Great One Mitchell D., and the D stands for “day trading up a storm,” you’re gonna want to check out the less crowded trades for your day trading palate.

How about some chips to taste? You want to be watching ASML (Nasdaq: ASML) — the chipmaker’s chipmaker — or Lam Research (Nasdaq: LRCX), both hammering it out on the semiconductor foundry back end.

Or why not try trading NextEra Energy (NYSE: NEE) to cover up this week’s obligatory hydrogen spot? Other than those glorious few … I hope you like planes, trains and banks. Oh, and more banks.

And shout-out to my fellow aspiring railroad barons out there: CSX (Nasdaq: CSX) and Union Pacific (NYSE: UNP) both report this week.

Unless you like playing archaeologist and digging up telecom dinosaurs like AT&T (NYSE: T) … I hope you have an appetite for financial earnings.

There’s a lil’ something for everyone this week, whether you’re into the big banking bros like Bank of America, brokerages like Charles Schwab (NYSE: SCHW) or the credit-lending cronies like American Express (NYSE: AXP).

What stocks are you looking at for this week? Got any earnings trades in your sights? Are any of your personal picks entering the earnings confessional?

Let me know your thoughts over at GreatStuffToday@BanyanHill.com. Who knows? You might just see your email in this week’s edition of Reader Feedback!

Otherwise, here’s where else you can find Greatness: