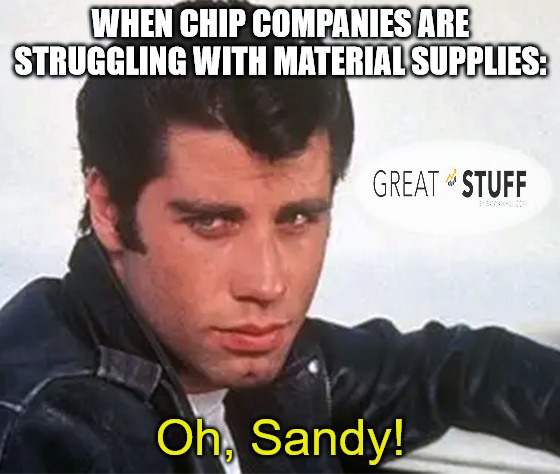 Friday Four Play: The “I Don’t Like Sand” Edition

And y’all thought I was going to quote Star Wars there, didn’t you?

(My colleagues here at Banyan feared something else: “Take a look at this sandcastle…”)

Yes, Great Ones, it’s time to talk about sand again. The fact is, unlike Anakin Skywalker, I’m starting to like sand quite a bit. Sitting on the beach, drinking a mojito and lounging without a care in the world has always been one of my favorite pastimes.

But I’m getting ahead of myself. That daydream is our investing end game, right? So, how does sand get us to … umm … sand?

Wait, hold up. Are we just going to ignore the Bible quote up there? Nobody puts Jesus in a corner!

Anyway … you’re right. I chose that Biblical quote on purpose. According to a growing number of reports, it seems that the “sand which is on the seashore” isn’t as bountiful as we once thought. We’re actually starting to run out of the irritating stuff.

(And Great One Jeffrey D. … if you’re reading this, are you an oracle or something? You asked about sand investing way back in January, you sly dog you.)

Just think of all the things that use those three things: glass, semiconductors and cement. And we’ve only just touched the surface! For instance, oil fracking uses a $#%@ton of sand.

“We just think that sand is everywhere. We never thought we would run out of sand, but it is starting in some places,” says Pascal Peduzzi, Director of GRID-Geneva, a United Nations environmental watchdog.

It shouldn’t be surprising. Global demand for sand has tripled in the past two decades, driven by the technology revolution and massive urbanization. No wonder there’s a semiconductor shortage — chipmakers can’t get sand!

While we’re not at a conservation tipping point where we’ll all have to shake out our sandals and swimsuits into a recycling bin after leaving the beach, the recent supply warnings from automakers and chipmakers are concerning.

They can have my sand when they pry it from between by cold, dead toes!

Anyway, let’s get back to investing. This is an investing e-zine, after all. So, how can we profit from this great sandstorm?

Well, as I told Great One Jeffrey back in January, U.S. Silica Holdings (NYSE: SLCA) is the single biggest pure play on sand and silica. And … surprising even me … the stock is up more than 56% since then.

Now, I didn’t make SLCA an official Great Stuff Pick back in January, and I’m not doing so now.

However, the stock has quite a bit of room to run. It’s down some 76% from its January 2017 highs. Back then, construction companies soared on the promise of trillions in infrastructure spending. That spending never happened, and SLCA took a dirt nap as a result.

So, if you love the irony of funding your retirement on the beach with an investment in sand, U.S. Silica is definitely worth a closer look. I’m putting this one on my watch list for sure, and I don’t care what Anakin thinks.

Though, if you’re still uncertain about U.S. Silica’s footing in the shifting sands of time … something closer to the heart of U.S. industry might be more your speed.

One North Carolina company holds the KEY to making this tech a global manufacturing power, unleashing what the Economic Forum predicts is a $100 trillion revival of American manufacturing.

And now for something completely different, here’s your Friday Four Play: 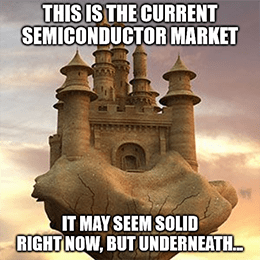 Hold on a second … we’re not done talking about sand. Semiconductor savant Broadcom (Nasdaq: AVGO) reported first-quarter earnings this morning, and while the company posted a Street-beating quarter … there were other concerns.

First and foremost were supply issues. Broadcom mentioned a supply shortage of materials it uses to make chips. So, not only are we facing unusually high demand for semiconductors, but we’re also facing supply issues for chip materials. I can’t help but think this relates to the sand debacle I discussed above.

Second, analysts remain concerned that many businesses are preordering chips to stay ahead of the supply shortage. Broadcom noted that 90% of its capacity for 2021 is already booked. In similar past occurrences, customers have been known to cancel orders, leaving companies like Broadcom holding the bag on a supply glut.

But Broadcom CEO Hock Tan reassured investors that the demand was real — not a supply-demand war — and that its customer orders couldn’t be canceled. If we can take Tan at his word, this is a huge win for Broadcom and a signal of future demand for economically critical Broadcom customers like Apple, Samsung and Google. 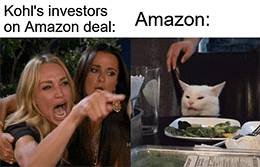 Ever since Texas froze over and the world started running out of sand, I’ve kept an eye out for any further indications that the apocalypse is nigh. You can understand why a great fear swept me this morning as I found myself actually interested in news from Kohl’s (NYSE: KSS).

Trust me: This one ain’t ending up on the watch list, though Kohl’s actually dropped a stellar quarterly report earlier this week.

Per-share earnings reached $2.22, which more than doubled expectations for $1.01 per share. Revenue fell year over year to $6.141 billion, but that still beat the consensus for $5.881 billion. Better yet, the company even expects 2021’s sales to grow in the mid-teens.

For the most part, it looked like Kohl’s was managing through the pandemic A-OK.

Are things not A-OK in the Kohl’s Kingdom? I was just there last week!

Turns out, a group of Kohl’s activist investors are livid with moves by the company’s current board. Reinstating a dividend when rev’s falling? Wack. Underperforming other retailers? Wack. Accepting Amazon returns in your stores? Wack.

In fact, Kohl’s partnership with Amazon.com (Nasdaq: AMZN) seems to be the sorest spot.

Where Kohl’s is touting its Amazon returns program as a traffic driver for stores, activist investors only see store costs rising without any benefit to revenue. The unenthused group owns about 9.5% of outstanding KSS shares but seeks full board control to start addressing its laundry list of complaints.

Personally, I’ve never gone to Kohl’s for Amazon returns — at our location, all that “convenience” does is clog up the customer service/returns desk. Though, other Great Ones tell me their emptier-than-ever Kohl’s funnels you straight to a separate Amazon-return kiosk, no questions asked.

Yeah, yeah, we know what you’re here for … Amazon’s in the back.

What else can I say? Kohl’s is trying to gain foot traffic by … making it even easier to buy the same stuff online. And then it wonders why Amazon continues to steal retail’s lunch.

My colleague, Michael Carr, found a way to trade the markets, making the same trade every week. He does this because any given week, this trade can knock it out of the freaking park. 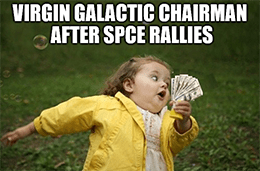 Virgin Galactic (NYSE: SPCE) plummeted back to earth today, fresh off the news that Chairman Chamath Palihapitiya sold off the last of his personal stake in the company to fund other new projects.

For context, it was Palihapitiya who took Virgin Galactic public as a SPAC back in 2019, and he still indirectly owns a sizeable stake in the company through said SPAC. But even he’s ready to get off Richard Branson’s rocket-fueled romp.

Though the chairman said he remains “committed and excited for the future of SPCE,” it’s never the best optics when one of your top dawgs is cutting losses to get out of dodge.

And he’s not the only one separating from the rocket today: Former CEO and current Chief Space Officer George Whitesides is stepping down. First off, how do you just give up that kind of title? Second, maybe Virgin’s next space-based exec will actually focus on … you know, getting to space?

Though, I don’t have much hope on the commercial space-faring front … and I don’t expect you to, either. This week’s SPCE sell-off kicked into gear after Virgin further delayed such a goal, now hoping to launch commercial spaceflights in 2022.

It’s funny: Whitesides and his wife still have spaceflight tickets they bought in 2005. At least Palihapitiya was able to cash out and go off galivanting in the climate change fight. And here I am trying to imagine how either of them would convince SPCE investors to stay bullish:

Needless to say, SPCE is down 18% today and now 58% off its February highs.

No. 4: And It Gets Everywhere 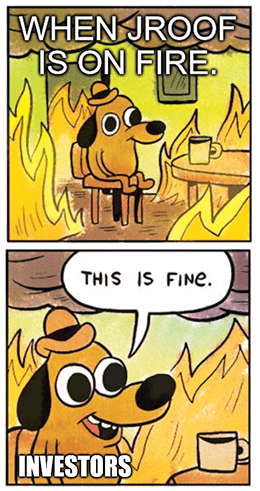 You know what’s getting everywhere lately? Hydrogen. And for good reason: Last year, analysts at Bank of America, Goldman Sachs and Morgan Stanley predicted that the hydrogen market could hit $11 trillion by 2050!

So, naturally, everyone and their mother wants to get in on the action. Enter Jericho Oil (OTC: JROOF) … or, as the company is now called, Jericho Energy Ventures.

On Thursday, March 4 — yesterday to those of us who read Great Stuff regularly — Jericho officially changed its name to better reflect its commitment to greener energy and hydrogen production.

I’m still not ready to climb the walls of Jericho and raise the bullish buy flag. But, this is yet another sign that the company is moving in the right direction. It also confirms my projections that more oil companies will use readily available hydrogen production to move toward greener energy solutions.

It will take some time, but hydrogen will dominate the energy landscape eventually — mostly because it’s cost effective for Big Oil to join the parade this way. Jericho is small enough and nimble enough to make that transition now.

If you’re down for a healthy dose of risk, or you just like penny stocks — What, options too risky for you? — Jericho is well worth a look as a potential player in the hydrogen market.

Great Stuff: This Is Where The Fun Begins…

Great Ones, I hope you (and your portfolios) have made it to weekend safe and sound, ready to rest up for another week’s Greatness. Though, don’t rest too easy just yet — if you haven’t dropped us a line and shared your thoughts, don’t even think about hitting that “X” button!

Whether you’ve got a trade to brag about or a rant to rag about, we want to hear it! Anytime the market muse calls, send us a quick message or a full-on novella.

GreatStuffToday@BanyanHill.com is where all the coolest Great Ones chill all weekend long. Join us!

And you can even click right here to save a step. Finally, remember what Mr. Great Stuff always says: Like Stuff? Share Stuff! So be sure to share ‘Stuff with your friends, family and everyone right down your email list. Send it all!