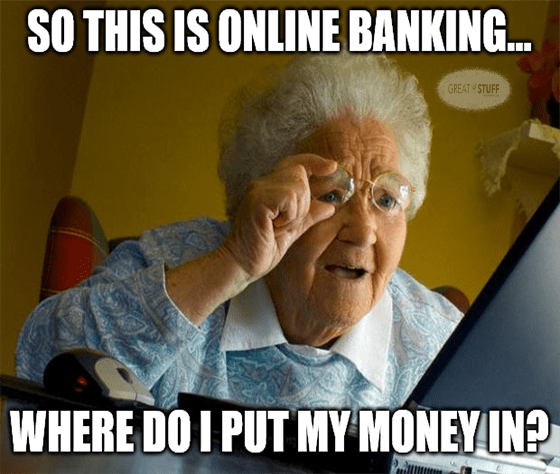 Why Is SoFi So Fine?

Great Ones, why is SoFi Technologies (Nasdaq: SOFI) so fine?

Y’all know I’m not a big fan of talking about banking stocks. Don’t get me wrong, they’re often really good investment opportunities. But they’re just not that exciting at all.

What’s exciting about that?

The point is, it is possible to be exciting and be a bank. Just look at SoFi Technologies.

If you’re unfamiliar with SoFi, what rock have you been hiding under?

What’s there to know? SoFi is a bank, right?

Yes, it’s a bank. But it most certainly is not your father’s bank. In fact, SoFi might just confuse the tar out of your father. You see, SoFi isn’t a brick-and-mortar bank. It’s completely online. Instead of buildings and tellers, SoFi has an app.

Fine. I get it. I mean, I’m not banking with an app, but I see the appeal.

Same. But do you realize just how appealing SoFi has become? I have to say even I was impressed. Here are the numbers from SoFi’s latest trip to the earnings confessional:

Now, you might look at that loss and think everyone’s gone crazy … especially if you do a little digging and find out that SoFi only lost $0.05 per share last year.

Furthermore, revenue jumped nearly 56% from the same quarter in 2021. And that’s not all…

Since SoFi is an online-only bank, Wall Street is paying very close attention to the number of new customers SoFi is able to bring in every quarter. In the latest quarter, SoFi added roughly 424,000 new customers.

What’s more, the company has added just shy of half a million new customers in each of the past four quarters! So much for the post-pandemic online slowdown. 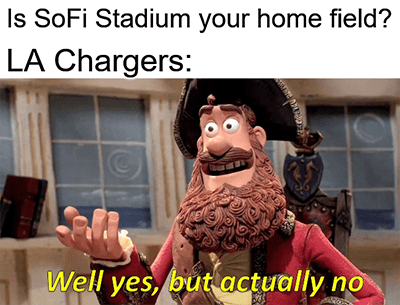 SoFi said that since it officially obtained its banking charter earlier this year, the company has seen total deposits rise 86%, with 85% of those from direct deposits.

I never knew app banking was so popular.

Me neither. But before you go buying into SOFI stock’s 13% rally today, there is at least one point of concern: SoFi’s biggest growth product right now is personal loans. Surprise! Surprise!

Now, personal loans aren’t really a problem most of the time. If your economy is running smoothly, dishing out personal loans is a fine, trouble-free way to grow your banking business. But with a recession on the horizon? That’s where things get sticky.

If it is, bully for SoFi and its investors.

The bottom line here is that SoFi appears to be gaining traction as the online banking solution for the modern generation. It plays well with the new “work literally anywhere” workforce.

If you’re up for a bit of potential risk down the pike, SOFI stock could be a buy right now, even after today’s rally — depending on your overall opinion of the U.S. economy, that is.

But no matter your opinion on the economy … no matter what bank you use, app-based or otherwise … you need to know about Project Hamilton.

According to Ian King, Project Hamilton will end the U.S. dollar as we know it — and replace it with this new digital currency. One that will be completely controlled by the Federal Reserve and U.S. government. One that could be potentially disastrous for you and your financial wellbeing.

Go here to get all the details. 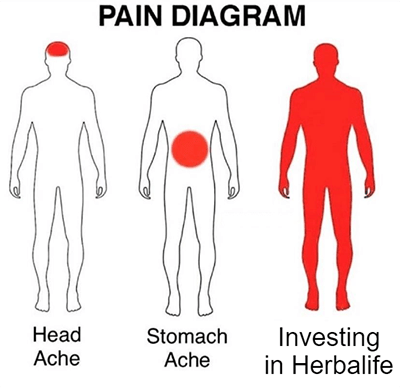 It’s an Herbalife-style. — That one guy selling vitamins outside my gym.

Honestly … did you know that Herbalife (NYSE: HLF) still exists? Like, as a publicly traded company? It’s not a successful one, mind you, but … it’s there.

Even MarketWatch calls Herbalife a “nutrition marketer” instead of an actual bona fide nutrition company — and when MarketWatch of all rags is throwing shade at you (on you?), that’s plain sad.

Oh, and the company’s CEO revolving door continues to spin: CEO John Agwunobi is out, and former CEO Michael Johnson is back in. Gee, what encouraging signs for investors…

That said, HLF shares were only down 1% on the news, so investors have that going for them … which is nice.

It (Wasn’t) A Very Goodyear 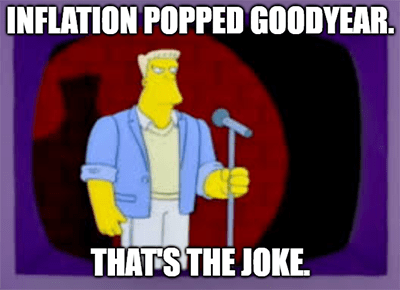 But now the days are short…

Investors are in the autumn of the year, and now I think of earnings reports as vintage wine … from fine old kegs, from the brim to the dregs.

Uh-huh, and did it pour sweet and clear? You ain’t Sinatra — get on with it!

Goodyear now believes that cost inflation will peak in the fourth quarter of the year instead of the third.

Heard that one before.

Did I mention that the tire tycoon just reported a horrendous double miss? Yeah … Goodyear investors weren’t too keen on that part either. I mean, there’s a reason why GT shares skidded 15% on the news (probably not enough grip on the tires due to overinflation, if I had to guess). 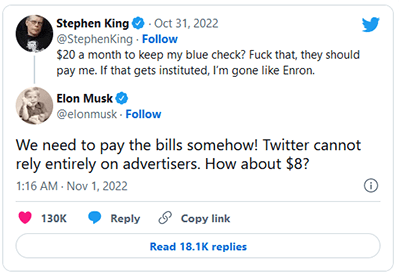 Elon’s looking to better monetize the platform to “pay the bills!” All of a sudden, Twitter “cannot rely entirely on advertisers” … you know, like it was doing before he bought it.

The newest monetization plan is to charge users for having the fancy blue “verified” check mark. Brilliant. By the way, that checkmark was designed to distinguish real people from fake people and bots online … not for monetization purposes. You’d think ol’ Elon would know that, given his feigned bot obsession.

Then there’s the fact that the Tesla/Twitter CEO is now bringing over 50 of his in-house Tesla bros to review Twitter’s code. Because if you can (barely) program Autopilot software for Tesla, social media code must be a piece of cake, right?

I’m sure Tesla investors were simply thrilled to learn that Elon’s taking top engineers away from Tesla to go work on his side project … well, one of many side projects. Wearing multiple CEO hats didn’t work for Jack Dorsey at Twitter, and it’s not going to work for Elon either.

As if sensing the need to keep Tesla investors pacified until the next disappointment, Musk spun the rumor mill wheel and landed on “Cybertruck hype.”

According to a new statement, the Cybertruck that wants to be a boat but will ultimately fail as both … will be out next year! Woohoo, a whole two years behind schedule!

Psssh … and you want to be my social media salesman. 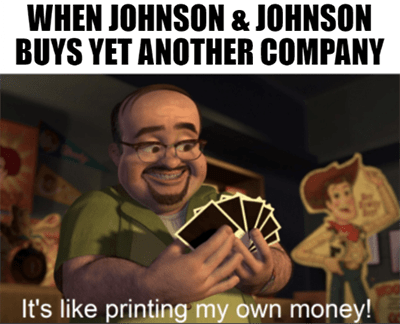 I’m hedging my bets here … because this is biotech. Big biotech, at that.

Other than the headline news and knee-jerk stock reaction, the takeover appears to be a pretty open-and-shut case, though one might wonder why Johnson & Johnson is buying up another health product company while it’s trying to spin off its consumer health care business.

I mean, we aren’t selling heart pumps over the counter now, are we?

Easy, Great Stuff. The answer is money. Lots of it.

What do you think, Great Ones? Have any of you ever banked with SoFi — or are you like me and diametrically opposed to a bank without brick-and-mortar locations? Don’t judge. I’ve got my reasons…

Share your side of the conversation in our inbox. And if you ever have a stock or investing idea you’d like to see Great Stuff cover, let us know at: GreatStuffToday@BanyanHill.com.