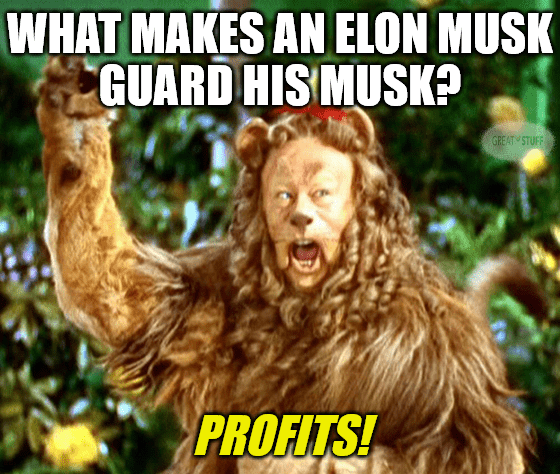 Great Ones, what makes the Musk Man guard his musk?

What makes Tesla (Nasdaq: TSLA) a wonder of Wall Street?

What has Musk got that other electric vehicle (EV) makers ain’t got?

Yeah, pretty much. Tesla CEO Elon Musk may not be the most congenial man on Wall Street, but he does know how to make his shareholders happy…

No, this isn’t another “funding secured” tweet. One would hope Elon has learned his lesson on that front … or maybe not: “Elon Musk says he’s considering building a new social media platform.”

The Tesla what? Didn’t TSLA just split five-for-one not that long ago?

Right you are, Great Ones. We’ve had first stock split, yes. Back in August 2020, Tesla did split five-for-one. With TLSA doubling in value since the split, some investors have wondered: But what about second stock split?

Well, Tesla has you covered.

In an SEC filing this morning, Tesla announced that it would ask shareholders “for an increase in the number of authorized shares of common stock … in order to enable a stock split of the Company’s common stock in the form of a stock dividend.”

Assuming shareholders approve — and I can’t think of a reason why they wouldn’t, given how successful the last split was — Tesla will use the split to pay out a one-time stock dividend to shareholders. This works exactly like a regular dividend, except that you’re getting stock instead of a cash payout.

The big question I’m sure many of you are asking is: “Why would Tesla do such a convoluted dividend?”

Well, I’ll tell you. You see, a normal cash dividend is typically taxable as ordinary income. On the other hand, a qualified stock dividend is taxed at the much lower capital gains rate. If you’d like to know more about stock dividends and taxes, click here. Personally, I’d rather go take a nap…

That said, the cynical side of me thinks that the timing on this announcement was just too convenient.

I mean, did any of you even see the news that Tesla is halting production at its Shanghai factory?

Everyone from investors to Wall Street to the mainstream financial media zeroed in on the stock split announcement. The Shanghai plant closure story got buried deeper than a Mars probe programmed in feet but given instructions in meters. (Yes, that really happened.)

And to make extra sure you didn’t pay too much attention to the Shanghai plant closure — it was closed due to COVID-19, by the way — Elon Musk himself began speculating about launching his own “free speech” social media site.

Of course, this is probably all one big coincidence … and I’m just stirring things up. Back to reality here…

From an investing perspective, if you’re already holding TSLA stock, this is really good news for you. Keep holding and wait for that special stock dividend.

If you aren’t holding TSLA stock … well, now might not be the best time to buy in terms of price, but Tesla remains a solid long-term investment option. And if you wait too long to buy in, you’re gonna miss out on that stock dividend and pay too much for TSLA stock.

Personally, I’d wait until this latest round of hype dies down and nab the shares on a pullback … but that’s just, like, my opinion, man.

So while Elon tries to bury news beneath stock splits, dividends and cries of free speech … don’t let this next Tesla tale slip you by either:

A former Tesla employee released a brand-new innovation promising to make every EV out there instantly obsolete. Some call this man “Employee No. 7.” Even the “Godfather of the EV Revolution.”

He created the first working Tesla battery. Now he’s about to change everything again.

Seven analysts were all in agreeance that XPeng would deliver an adjusted loss that averaged out to $0.33 per share.

But XPeng put the pedal to the metal last quarter, losing just $0.22 per share on revenue of $1.34 billion.

Now, XPeng CEO He Xiaopeng hinted that the company could’ve posted better returns had higher production costs not cut into profits. (Tell me something I don’t know, He.)

But while gross profit margin fell to 10.9% from 13.6% this past quarter … that’s still leagues better than the 3.5% margin XPeng posted two years ago, circa the same time frame.

EV investors, you know the drill by now. The barest whisper of better-than-expected earnings is enough to send Wall Street wild these days — especially when it comes to carmakers that’ve been hampered by semiconductor shortages and cost-of-material meltdowns.

XPeng investors took one look at today’s earnings report, shrugged and said: “Hey, it could’ve been worse.” As such, the stock is trading just 2% lower on the day.

Now, if you regularly tune into Great Stuff’s EV Days but don’t have any skin in the game (yet) … may I remind you there are more investment opportunities within the EV market than just the carmakers themselves.

This 40-year Wall Street veteran predicts an exciting, new battery tech could create more demand for EVs than ever before, simply by making them cheaper for everyday customers.

The Bad: Beyond Pays The Piper 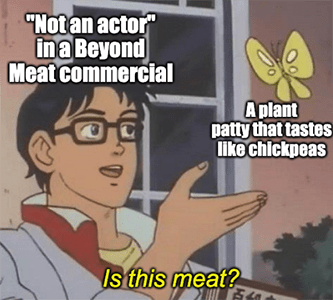 Piper Sandler analyst Michael Lavery lowered his rating for Beyond Meat (Nasdaq: BYND) this morning, slicing the stock to underweight from neutral.

Lavery also hacked his price target for BYND nearly in half, from $50 to $29.

Fake meat fiends will be happy to know Lavery’s decision didn’t have anything to do with Beyond Meat’s performance, per se — although the McPlant’s muted reception certainly hasn’t helped matters — but rather the “competitive intensity [that’s] growing” in the plant-based food industry.

For example, over the past few months, several competitors have come out of the woodwork that could give Beyond a run for its meatless money — including new startups Motif FoodWorks, Hooray Foods, Eat Just and Daring.

What these companies lack in terms of branding (at least compared to Beyond), they could more than make up for in the taste department — arguably an area of Beyond’s business the company has yet to improve upon. I said what I said…

Following today’s downgrade, no amount of Pepto could keep the burn out of Beyond. Investors trashed their shares quicker than a half-eaten McPlant patty, sending BYND stock sinking nearly 5%.

The Ugly: Well, That’s Not Confusing At All

Maybe it’s just me and my continuous lack of sleep, but AT&T’s (NYSE: T) detailed plans for its WarnerMedia spinoff sound way too complicated for a Monday morning.

In case you missed the media mogul’s announcement, AT&T will soon offer current stockholders a quarter of WBD shares — the ticker symbol WarnerBros. Discovery will now trade under — for every share of T stock they own.

Doesn’t sound too complicated so far…

Yeah, until you dig a little further into AT&T’s plans and learn the company’s proposed a weird period of time where you can sell your T shares and decide to keep the WarnerBros. option … or not:

Additionally, in the two-way trading window, those who wish to keep AT&T shares while selling the right to receive WarnerBros. Discovery can use a temporary when-issued option that will be available on the Nasdaq.

Come on, you didn’t expect this to be simple, did you? It’s AT&T. Nothing is ever simple with AT&T.

In fact, looking at AT&T’s stock chart today, investors didn’t know whether to be wide-eyed over their upcoming WBD shares or worried they’ll accidentally sell those shares during this “regular way” trading window.

My advice to any T stockholders? Be very careful about which “market” you’re selling your shares in until this spinoff’s complete … and remember to read the fine print.

A hot, fresh-from-the-presses Chart of the Week? Don’t mind if I do!

As an aperitif to kick off the week, we’re digging into *checks notes* yield curve inversions!

We don’t often cover the bond market here in Great Stuff — usually just the James Bond market. But the changing yields on different Treasury bonds might offer some crucial info for you stock investors out there too. 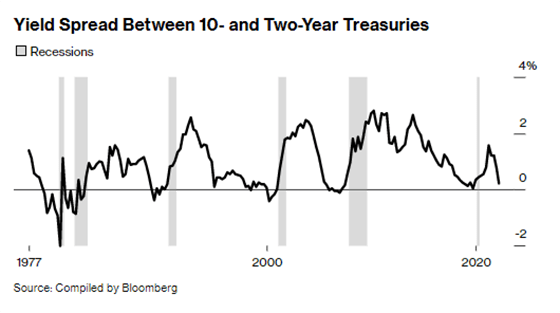 Oooh, ahhh … what exactly do I do with this knowledge?

See how narrow the yield spread is in the chart? And how every time they cross — or invert — a recession follows?

When the long-term yields sink close to (or below) short-term yields, it usually signals that investors are pessimistic about the economy’s long-term prospects. “Usually” being the key word here.

According to some analysts over at Morgan Stanley, yield curve inversions might not be the uber-accurate predictor of recessions that many investors and economists believe it to be. (And it pretty much is just Morgan Stanley positing this, mind you.)

The Fed is still buying up long-dated bonds like no one’s business, keeping their prices high and yields low. As such, Morgan Stanley estimates that the Fed’s quantitative easing actions have actually distorted long-term yields by about 50 basis points.

Now combine that with the Fed raising interest rates, and you have today’s yield-curve-inverting Chart of the Week.

What does this mean for you? If Morgan Stanley’s estimations are correct and not just back-of-the-envelope calculations … the inversion might reflect Fed policy more than recession risk.

But I, as you would expect, have doubts.

Hey, don’t get me wrong: I don’t want a recession any more than anyone else. But I need more than Morgan Stanley’s internal math to believe that the yield curve inversion is no longer a valid indicator.

One of these indicators could possibly be waved away due to the pandemic simply making everything … wonky, to say the least. But both? That’s a lot harder for me to ignore … and my Spidey Sense goes nuts whenever I hear “it’s different this time!!!”

What about you, Great Ones? Do you follow the yield curve in your investing? Are you a fully bonded bond investor? Do you think a recession is imminent?

Let me know your thoughts over at GreatStuffToday@BanyanHill.com. If you hit all the right buttons and say the right incantations, you might just see your email in this week’s edition of Reader Feedback!

Otherwise, here’s where else you can find us: